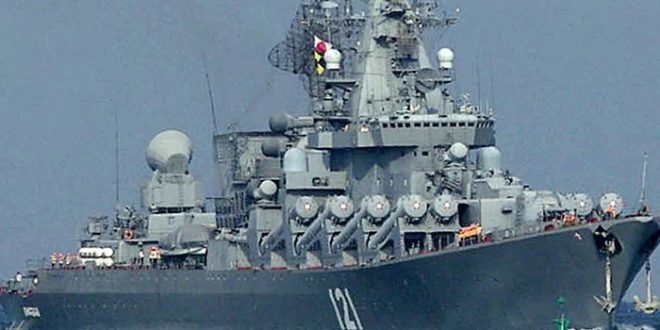 MOSCOW: Russia’s Black Sea flagship leading the naval assault on Ukraine has been “seriously damaged” by an explosion that a Ukrainian official said was the result of a missile strike.

The damage to the Moskva missile cruiser was caused by ammunition detonating “as a result of a fire”, the Russian defence ministry was quoted by state media on Thursday as saying, adding that the cause of the blaze was being investigated. 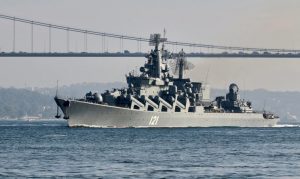 Ukraine’s southern military command later said that it hit the Moskva with a Neptune missile on Wednesday, causing significant damage, and that the ship had started sinking.

The southern military command said in a Facebook post that a fire had started after the strike. It said that Russian rescue ships were then hampered by ammunition exploding on board as well as bad weather that had caused the Moskva to start sinking.

The Russian defence ministry said that the crew had been evacuated, but “the ship was seriously damaged”.

Russia’s defence ministry also said that measures were being taken to tow the ship back to port.

The Moskva is the second major ship known to have suffered serious damage since the start of the war. Last month Ukraine said it had destroyed a landing support ship, the Orsk, on the smaller Sea of Azov.

Moscow’s Black Sea fleet is blockading Mariupol and off the coast of Odesa, and its ships have been used to bombard coastal cities.

The Moskva gained notoriety early in the war when it called on Ukrainian border troops defending the strategic Snake Island to surrender, only to be defiantly refused. 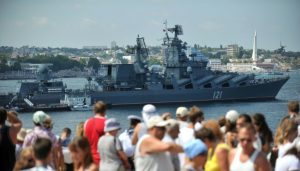 It was previously deployed in the Syrian conflict where it served as naval protection for the Russian forces’ Hmeimim airbase.

With the war entering its seventh week, US President Joe Biden announced an $800m military aid package for Ukraine that included helicopters and armoured personnel carriers.

And international prosecutors said the conflict has turned Ukraine into a “crime scene”, suggesting that those responsible could one day face prosecution.

Having initially expected to swiftly overcome its neighbor, Russia has faced fierce resistance, leading Moscow on Wednesday to threaten to strike command centres in Kyiv if Ukraine continues to launch attacks on Russian soil.

The warning sparked alarm in Kyiv, which had been experiencing some respite after Russian forces withdrew from the region after failing to secure the capital.

It had been believed that Moscow was refocusing its war aims to the south and east of the country, with Ukrainian authorities warning of bloody new clashes to come in the eastern Donbas region. (Int’l Monitoring Desk)