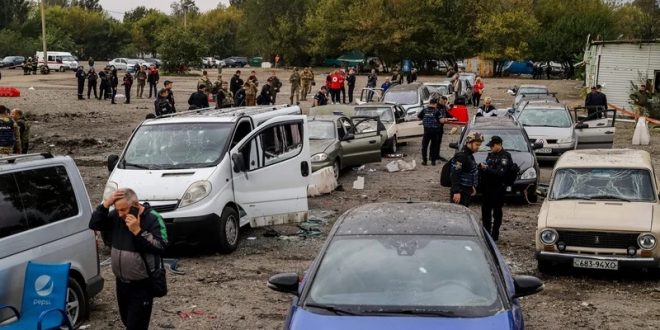 KYIV/ MOSCOW: A Russian missile attack targeted a humanitarian convoy in Ukraine’s Zaporizhia region, killing at least 23 people, according to a regional official. 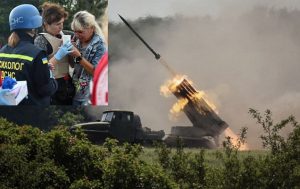 A Moscow-backed official in Ukraine blames Kyiv’s forces for the attack.

The anticipated annexation of Donetsk, Luhansk, Kherson and Zaporizhia has been widely condemned by the West.

A Ukraine official said that a Russian missile attack on the Ukrainian city of Zaporizhzhia killed at least 23 people and wounded dozens of others at a car market.

The convoy of civilian cars had been assembling at the car market on the city’s edge, preparing to leave the area and visit relatives and deliver supplies in an area controlled by Russia.

The impact blew out car windows, and the sides were punctured by shrapnel, a witness told Reuters.

A Russian official blamed Ukrainian forces for the deadly strike. 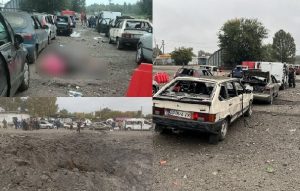 Zaporizhzhia regional Governor Oleksandr Starukh announced in an online statement on Friday. He said at least 28 were wounded when Russian forces targeted a humanitarian convoy heading to Russian-occupied territory.

He posted images of burned-out vehicles and bodies lying on the road.

“As of now we know about 23 dead and 28 injured. All civilians, local people. Burn in hell damned Russians,” Oleksandr Starukh wrote on Telegram.

Starukh said those in convoy planned to travel into Russian-occupied territory to pick up their relatives and then take them to safety. He said rescuers were at the site of the attack.

“The people who were hit were mostly in their cars or next to them. There were other strikes, more than 10. You will be informed about them later,” he told reporters on the scene. 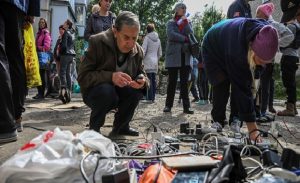 Ujryumov told Reuters that the Russian military “know that columns are formed here to go to the occupied territories. They had the coordinates.

“It’s not a coincidental strike. It’s perfectly deliberate,” he said.

However, Vladimir Rogov, an official in the Russian-installed administration in the Zaporizhzhia region, blamed the attack on Ukrainian forces.

“23 people killed … in Ukrainian strike on convoy of cars at exit to liberated part of Zaporizhzhia region,” he wrote on Telegram.

The strikes come as Moscow prepares to annex four regions into Russia after an internationally criticized referendum vote as part of its invasion of Ukraine. Those regions include areas near Zaporizhzhia but not the city itself, which remains in Ukrainian hands.

The United States Senate has passed a short-term government funding bill that provides $12.3bn in aid to Ukraine. 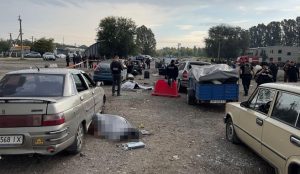 The legislation, passed by a 72-25 Senate vote on Thursday, is expected to be approved in the House of Representatives before making it to President Joe Biden’s desk.

Norway may impose a ban on Russian tourists similar to the one introduced this week by Finland, the country’s justice minister has said.

“We will close the border quickly if necessary, and changes can come at short notice. There have been few arrivals in Norway compared to Finland, and the situation is different here,” Emilie Enger Mehl said in a statement.

Norway, which is not a member of the European Union but is part of the passport-free Schengen zone, has kept open its Arctic border with Russia. Arrivals there have recently risen to a few hundred people a day. (Reuters)