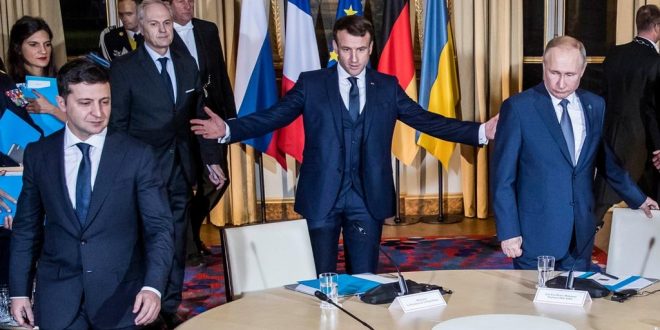 MOSCOW/ KYIV: Moscow and Kyiv on Wednesday agreed at talks in Paris that all parties should observe a ceasefire in the east of Ukraine after more than eight hours of discussions which were hailed by a French diplomat as sending a “good signal”. 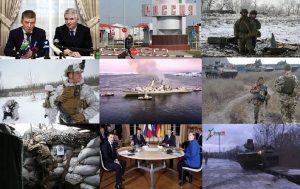 A Russian troop build-up close to the border with east of Ukraine has raised fears the Kremlin is planning a military intervention in its pro-EU neighbor as Moscow presses demands over NATO’s presence in eastern Europe.

An aide to French President Emmanuel Macron, speaking on condition of anonymity, stressed that the Paris talks had been about resolving the separatist fighting in eastern Ukraine since 2014, not the threat of a Russian invasion but “the question was whether the Russians wanted to signal a thaw”, he said, adding that the “difficult” discussions had ultimately resulted in something positive.

“In the current circumstances, we received a good signal,” he said.

For the first time since 2019, Ukraine and Russia agreed to sign a joint statement along with France and Germany about the ongoing conflict between Ukrainian forces and separatists in the east of the country.

The four nations have been working towards reaching a peace deal for eastern Ukraine since 2014 and are known collectively as the Normandy Group. 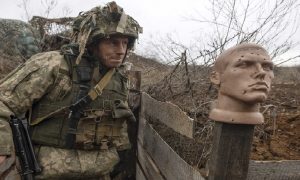 “However difficult the discussions have been since December 2019, the Normandy Group has been able to agree on several key points,” the French aide said.

The joint statement committed both sides to “an unconditional respect for the ceasefire” and also said that they would meet again in two weeks’ time in Berlin.

A 2014 ceasefire deal, bolstered in 2020, helped end the worst fighting over two separatist regions in eastern Ukraine that has claimed some 13,000 lives.

Western countries have been concerned that Russia could use a flare up in fighting along the front between Ukrainian soldiers and separatists as a pretext to launch an invasion of its neighbor.

The Kremlin’s envoy Dmitry Kozak said the main outcome of the four-way talks also involving France and Germany was the agreement on keeping the ceasefire.

He said that “despite all the differences in interpretations, we agreed that the ceasefire (in eastern Ukraine) must be maintained by all the parties in line with the accords”. 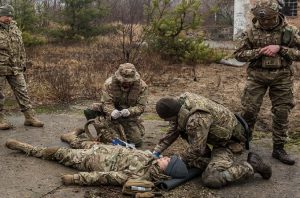 Announcing that the new round of talks would be held in Berlin in two weeks, he added: “We need a supplementary pause. We hope that this process will have results in two weeks.”

He said that the Berlin talks would take place at the same level as the Paris session involving diplomatic envoys, adding that for the moment a summit involving heads of state was “not on the agenda”.

“We hope our colleagues have understood our arguments and that in two weeks we will achieve results,” said Kozak, who is also the deputy head of President Vladimir Putin’s administration.

He insisted that the situation in the east of Ukraine, where pro-Russia separatists have declared breakaway regions and the tensions along the border were “two separate issues”.

Ukraine’s envoy Andriy Yermak, speaking to reporters separately, said that the talks were “not easy”.

“The support for the sustainable ceasefire is extremely important,” he said, adding that there were differences over the interpretation of the Minsk Agreement which ended the worst of the fighting in 2014. (Int’l News Desk)