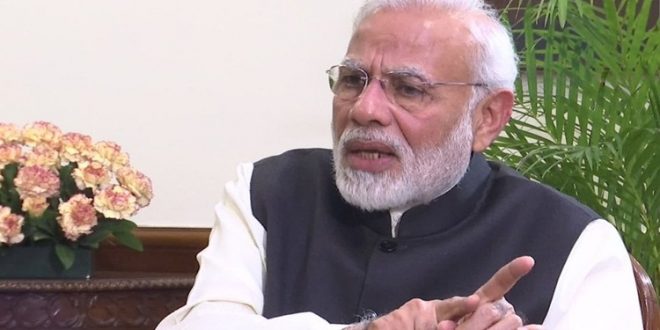 Ram Temple ordinance possible after legal process gets over: PM

Prime Minister Narendra Modi on Tuesday made it clear that a decision to bring an ordinance on Ram Temple at Ayodhya can be taken after the judicial process gets over.

In an interview to a news agency, Mr. Modi accused Congress of delaying the Ayodhya verdict in the Supreme Court.

Mr. Modi said Congress lawyers are creating hurdles in the apex court so that an early judgment is not delivered.

When asked about farm loan waivers, Mr Modi said it is not the ideal solution to their debts.

The Prime Minister said his government is making sincere efforts to improve the lives of farmers. He enumerated steps like soil health cards, better quality and cheap seeds and hike in MSP on 22 crops to benefit farmers. He said the government is also taking steps to provide farmers with facilities, such as cold storage, warehousing, value chain addition so that they get most of their yield.

The Prime Minister also talked about measures to benefit middle-class people. He said his government has brought inflation down to about 2 per cent, unveiled Ayushman Bharat, mudra yojana, UDAAN and start-up schemes for the convenience of the middle class.

When asked about Opposition’s claim that BJP will get around 180 seats in general elections this year, Mr Modi maintained that BJP is confident and its morale is high to fight the polls. He said, Congress’ only aim is to entice more parties for an alliance.

On Rafale, the Prime Minister said he has already made a statement on the issue in Parliament and the Supreme Court has also given its verdict.

On economic offenders – Nirav Modi, Vijay Mally and Mehul Choksi Mr Modi said they fled the country fearing a tough policy of the government. He said they will have to face the law as the government is taking steps both legal and through diplomatic channels to bring them back to the country.

On Gandhi family facing court cases, Prime Minister said those considered first family are out on bail for financial irregularities, it is a big thing.

On Agusta Westland chopper deal middleman Christian Michel, Mr Modi said it is worrying that a Congress worker turned up to be his lawyer. He said the ongoing investigation will bring out truth in the matter.

When asked about demonetisation, Mr Modi said it was a measure to put an end to a parallel economy which was damaging the country’s progress.

On GST, the Prime Minister said it has simplified the tax system. He said the government has lowered tax on 1200 items to benefit the common man.

Speaking on surgical strikes by Indian troops on terror launch pads across LoC in 2016, Mr. Modi said, it was a big risk but carried out for the sake of the country. He said, the date for the strikes was changed twice. The Prime Minister said, it was unfortunate that opposition questioned the surgical strikes.

Mr. Modi said, he was anxious all the time the troops remained across the LoC, adding that he had asked that the troops return before the sunrise.

On Pakistan, the Prime Minister said irrespective of the government in India, New Delhi never opposed dialogue with Islamabad. He, however, said talks cannot happen if terror from Pakistan continues.

On Doklam standoff with China despite meetings with President Xi Jinping, Mr Modi said India should be judged on the basis of its response. He said nothing has happened with India that can be considered as deceit. The Prime Minister New Delhi’s principled position has been that it wants friendly relations with its neighbours.

The Prime Minister called for fruitful discussions in Parliament on important matters. He said every member should respect for the sanctity of Parliament as it the forum for debate and discussion.

Reacting to the Prime Minister Narendra Modi’s interview, Congress spokesperson Randeep Surjewala described it as bereft of ground reality and full of rhetoric.