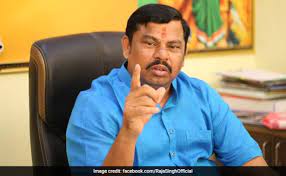 Raja Singh seeks replacement of bullet-proof vehicle provided to him

Hyderabad: Suspended BJP MLA Raja Singh has written a letter to the Intelligence Wing of the Telangana police seeking to replace his bullet-proof vehicle that was provided to him, as it was in “bad condition” and was giving trouble which he claimed may also put his life in “danger.” According to the letter, the vehicle allotted to him was a 13-year old one.

He said some of the Telangana Legislators were given new bullet resistant vehicles due to threat perception and sought to know what the conspiracy was in not allotting one to him despite him having security threats.

“Because of the negligence of the police department, you are giving chance to terrorist organisations and anti-social elements to attack me and you are throwing my life in danger,” he said in his letter written on November 17.

“Hence it is requested to the benevolent authority to kindly take immediate action and change the vehicle immediately,” the legislator said.

Singh said based on his request, the authorities had changed his vehicle earlier. However, the recent one also started giving trouble while he was going on emergency works

The Telangana High Court recently set aside the Preventive Detention Act filed against Raja Singh and ordered his release from prison.

The police on August 25 arrested the Goshamahal Legislator under a preventive detention provision, days after he got bail in a case relating to remarks against Prophet Mohammed and Islam.

He was subsequently suspended from the BJP.