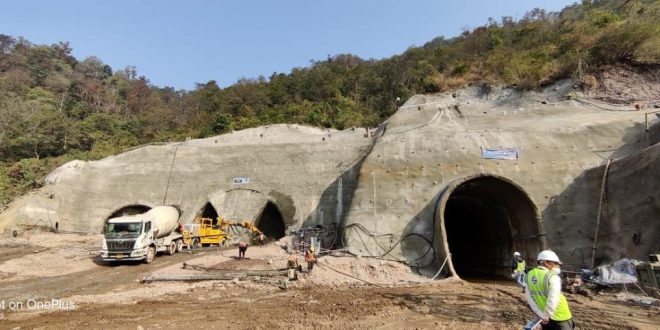 Railway connectivity to the Char Dhams

NewDelhi 17 Dec-2021;This is about a massive infrastructure update from Uttarakhand. This is about the Rishikesh-Karnaprayag electrified broad gauge-single track, one of the toughest rail routes, which is under progress. When ready, it will help provide rail connectivity nearer to the Char Dhams namely Kedarnath, Badrinath, Gangotri and Yamunotri, as the route will run over the foothills of the Himalayas in the Garhwal region of the Himalayas. The rail track distance from Rishikesh to Karnaprayag is 125.20 Kms. 105 kms of the route is covered in tunnels. This is not very common in India.
Out of a total of 105 kms of tunneling, this ambitious project requires 17 tunnels of which 19 kms have been excavated as of December 2021. Rail Vikas Nigam Limited (RVNL) completed the 18th km of Tunnelling on 12.11.2021 in the most challenging geology in a remarkably short span of 11 days.Work is going on in all the tunnels simultaneously.
The largest tunnel of this route will come up near Devprayag, at a length of 15.1 kms, which will become the longest railway tunnel in India.
Work is going on at a brisk pace.The railway line is scheduled for completion by December 2024, and anticipated date is March 2025, by which the trains will be operating for tourists.
The proposed 125-km stretch will have 12 stations, 35 bridges to be built at an estimated cost of Rs 16,216 crore. The project involves construction of 14.577 km upline and 13.123 km downline tunnels with embankment of about 800 meters at both ends. The scope includes construction of an ellipsoidal construction-cum-ventilation shaft of finished cross section of 79 square meters and a depth of 32 meters.
A portion of the rail track passes through the Rajaji National park.
Every Railway Station will feature the artwork that will promote the culture and tourism of Uttarakhand.
The Rishikesh – Karanprayag rail project is being monitored as a project of national importance through the PRAGATI (Pro-Active Governance And Timely Implementation) portal, a platform launched by the Centre for monitoring and reviewing important programmes and projects of the Union government.
The first station, Yog Nagari Rishikesh station (first Block Section of the project) was commissioned in March 2020. Target for commissioning remaining section is December 2024
5 Adit tunnels have been completed and one of the three major Rail Bridges, over river Chandrabhaga Ji at Rishikesh, has been completed. 2 major bridges over the river Alakananda were already completed within a record time of just 11 months. Alakananda is a major tributary of the river Ganga.