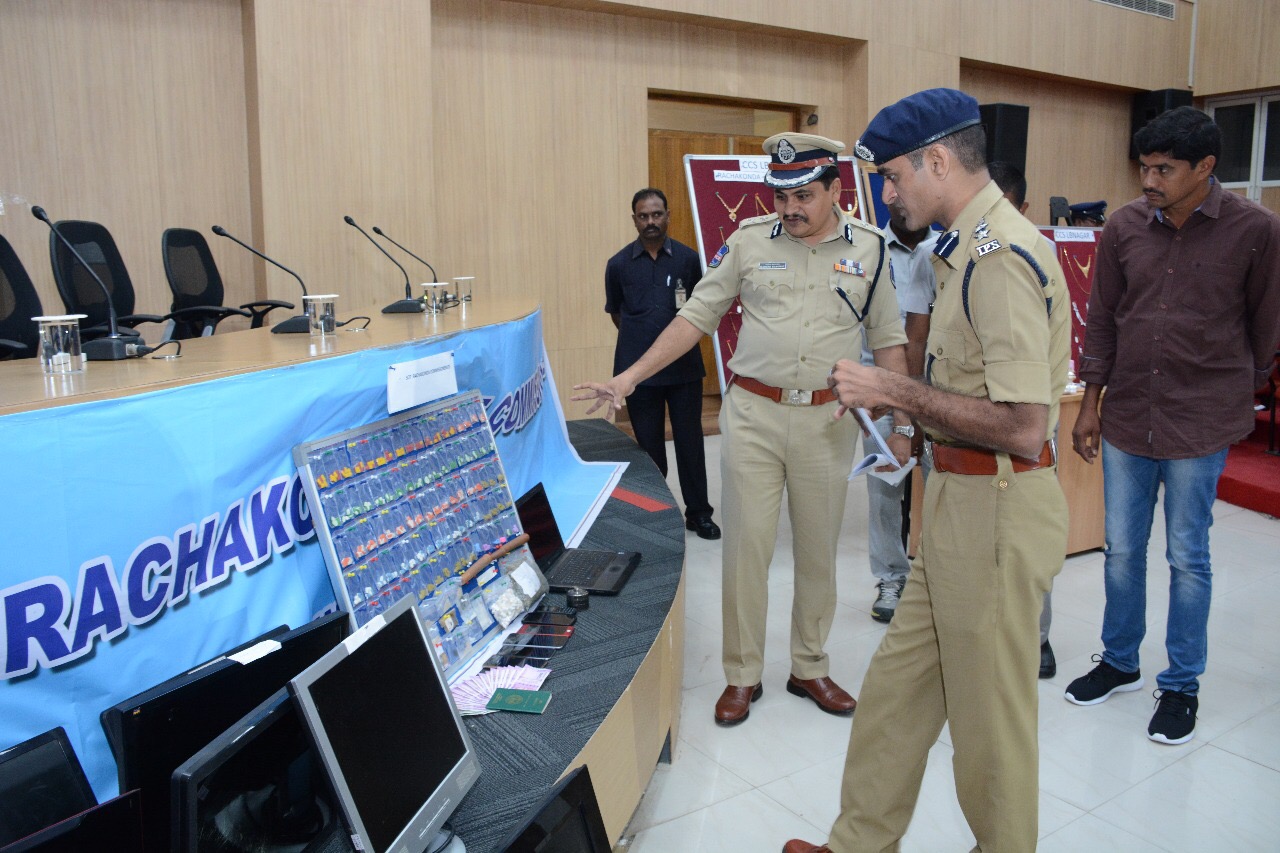 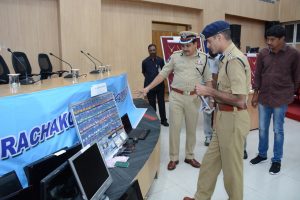 The accused Ajah Gabriel Ogbonna   is a Nigerian national who came to India in June-2014 on a student visa and joined degree in Nizam College. He was residing at Mini Gulshan Colony, Shaikpet Hyderabad. Later he discontinued his studies and he along with his countrymen by name Cosmas, John, Henry and Emeka were indulging in drug trafficking by procuring drugs from Goa, Bombay and Pune. He was supplying drugs to the needy customers at Hyderabad and other places also.

Earlier, on 10-03-2017 the accused Gabriel was arrested with 20 grams Cocaine at Secunderabad and a case was registered at Maredpally Police Station vide Cr.No.78/2017 U/s 8 (c) r/w 21(b) of NDPS Act 1985 and Sec. 14 (a) of Foreigners Act. After one month, i.e. in the month of April-2017 he was released on bail and staying with his girlfriend Ogunfowora Oluwapelumi Esther at her Flat No.415, Greenwood Residency, Yapral, Secunderabad. After releasing from the jail Gabriel again started drug trafficking by procuring the drugs from his countrymen at Goa, Mumbai and Pune and selling it to the needy customers. In Hyderabad, he is working as a drug trafficking agent with Cosmas who is also a Nigerian and drug peddler. Gabriel used to collect drugs from Cosmas residing Plot No. 393, 394, Block –B, Flat No.103, P & T Colony, Bandlaguda, Suncity, Rajendra Nagar. He along with Henry, John are 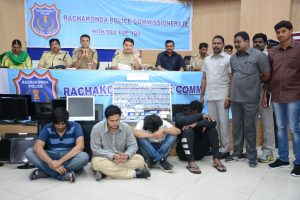 working as drug trafficking agents with Cosmas. They are selling one gram of Cocaine for 6,000/- rupees. He was taking shelter in the house of his girlfriend Esther at Sainikpuri, Yapral. After releasing from jail, he developed contacts with potential customers, consumers and he was regularly visiting to Delhi, Goa and Mumbai and procuring drugs and selling it to the needy customers at Hyderabad. On the tip of information SOT sleuths apprehended Gabriel at Yapral and on questioning him he disclosed that he was having financial problems and to earn money he was indulging in drug trafficking by procuring drugs from Goa, Mumbai, and Delhi and supplying them to the needy customers at Pubs at Banjara Hills/Jubilee Hills through his known contacts. At Hyderabad, he is working as agent to Cosmas and supplying drugs to the customers at Pubs and also on the request of his known contacts he is bringing the drugs from various places and supplying to his contacts and earning money easily.  After the arrest of Cosmas, John, Henry and Cyril he was absconding from Hyderabad and residing at his countrymen house at Delhi/ Bangalore and restricted his movements. Once in a while secretly during night time he is coming to Hyderabad and meeting his girlfriend at Sainikpuri.

One of his friend by name Ankith Pandey working as DJs at Pubs in Hyderabad was placing orders for drugs on Whatsapp on his international mobile number which he is using only for whatsapp chatting to bring the drugs for supplying to the needy customers at Pubs and they are paying huge amount for providing them with drugs. Ankith Pandey is also a drug trafficker and he is procuring the drugs from Gabriel and also through his contacts at Delhi, Mumbai and Goa and supplying to the needy customers in the pubs and rave parties. He is having number of contacts of drug peddlers and secretly organizing the drug trafficking business and earning money illegally.

Along with Gabriel one Pavan Kumar Reddy R/o Madhapur, Hyderabad is also a drug trafficker he is a regular customer of Cosmas and procuring the drugs from him for self-consumption and for supplying to the drug consumers. He is an event organizer having contacts with film personalities, celebraties, junior artists and female singers whose names are frequently cropping up in drug trafficking.

The accused No 2 Navyanth he is a resident of ECIL Kamalanagar, Kushaiguda, Hyderabad. He is a B.Tech student from Geethanjali College, branch ECE. He discontinued his studies and got habituated to narcotics. He came in contact with drug traffickers at Hyderabad and Goa. He was procuring the drugs by placing orders through online on “Alphabay website” it is a foreign website which is being anonymously operating for the drug traffickers all over the globe. He was receiving the consignment box containing narcotic drugs through post on a given address with in a period of 15 days. He was selling the drugs like Cocaine, Amphetamine pills, heroine, MDMA (Methayline Dioxy Methamphetamine), LSDs, Weeds (Strain) to the needy customers at Hyderabad and Goa. He was selling each pill for 1500/- rupees. He was regularly receiving the orders for drugs on his whatsapp number which he is using only for the said purpose.  After the arrest of drug peddlers at Hyderabad he escaped to Goa in the month of March and staying in a rented house at Anjuna beach by paying 450/- rupees per day and operating from Goa and supplying to his contacts at Hyderabad. There are number of men and women contacts in his mobile phone who are placing orders for drugs and paying the money on his Paytm number. He is earning lakhs of rupees by supplying the drugs to the customers both at Hyderabad and Goa. He is spending the money on his lavish lifestyle by attending the rave parties, Pubs and freedom blast. Ankith Pandey, Ganath Kumar Reddy and few others are regular customers and supplier of drugs at Hyderabad. They are mostly targeting the Pubs, educational institutions, rave parties for supplying the narcotics drugs to the customers and to their girlfriends.

The accused No 3 Ankith Pandey, is a native of Nagpur Maharashtra state. He was presently residing at Flat No. 205, Santos Nest Apartments, Nalanda Nagar, AG Colony, Attapur, Rajendera Nagar. He is working as DJ in Pubs at Banjara Hills, Jubilee Hills and various other places and earning money. He came in contact with Nigerians drug traffickers who were regularly coming to the pubs at Banjara Hills and Jubilee Hills. He was placing orders for drugs like Cocaine, Heroin, LSD (blots) drugs as there was demand for the said drugs by the customers. He is regularly in touch with Nigerians namely Gabriel, David and others on their international mobile numbers and he was placing orders for drugs on WhatsApp messages. He is also having contacts with drugs peddlers who were selling buying drugs at Delhi, Pune, Mumbai and Hyderabad. As he is a DJ in Pubs he is known to most of the customers who were frequently visiting to the pubs. Ongoing through his mobile contacts and WhatsApp messages it is established that Ankith Pandey is a regular agent to Gabriel, David and others and buying drugs from them at 2000 rupees for one pill and selling it the same for 5,000/- rupees at Pubs to the needy customers. On verifying his mobile number, it came to light that Ankith Pandey is a regular buyer of Gabriel, Navyanth and others and procuring the contraband drugs from Nigerian people at Delhi, Pune and Mumbai and selling the same drugs to the needy customers at 5,000/-per gram. He is also arranging rave parties in which he is playing as a DJ and also supplying drugs to the needy customers. He is also supplying the pills to the girl friends and made them habituated to drugs.

The accused N0  4 Ganath Kumar Reddy:He is a resident of Flat No.203, Block-3, Rain Tree Park, Malaysian Town Ship, KPHB, Hyderabad. He is a engineering college dropout. He got addicted to narcotic drugs. His father is a business man. He came in contact with drug peddlers at Hyderabad and he initially consuming the drugs like Ganja and Amphetamine pills. Later he got addicted and through his friend Navyanth he came in contacts with the drug consumers at Hyderabad. As he is financially sound he on the advice of Navyanth started investing money for purchasing the drugs. Both Navyanth and Ganath Kumar Reddy were supplying the drugs to the customers at Pubs Banjara Hills, Jubilee hills and Madhapur area. They both were secretly ordering the drugs on online and after receiving they are selling to the needy customers at Hyderabad. There are number contacts in the mobile phone which is being investigated.