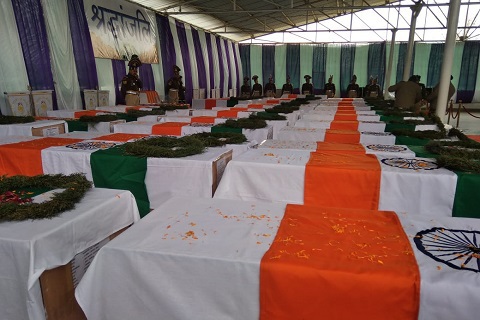 The death toll in the car bomb attack on a central reserve police force convoy in Lethpora area of Pulwama a day earlier rose to 49 on Friday. A senior police official said the number of casualties rose as five more personnel who were being treated at army’s 92-base hospital in Srinagar succumbed to their injuries.However public relations officer CRPF told Greater Kashmir that 40 personnel were killed in the attack.

An official said three more CRPF men were “still missing” while 38 personnel were being treated at the army hospital. On Friday, the spot where the attack happened—around 100 meters of the road stretch—was sealed and traffic diverted.A team of the National Investigation Agency (NIA) arrived in Kashmir to assist the Jammu and Kashmir Police in forensic evaluation of the scene of the attack.“We are assisting the Jammu and Kashmir police in its investigations into the attack,” an official of the NIA said.“A team of around a dozen NIA officials headed by an IGP is in Kashmir for the purpose,” he said.The probe agency has not taken over the case, the official said.No pedestrian movement was allowed in the area by the forces.During the day, contingents of police and paramilitary forces were seen conducting searches of vehicles and pedestrians at various areas along the highway including Awantipora, Bijbehara, Pampore, Pantha Chowk and Kakapora. “The security teams are conducting searches here to trace bodies of three paramilitary personnel which are yet to be recovered,” said a CRPF man patrolling the highway.Mangled remains of the CRPF bus targeted by the attacker and of the vehicle used for the attack were visible on the divider of the highway.The spot has turned black with smoke and soot that emanated from the explosives. Patches of the road have been ripped apart. The metal pieces and torn clothes were still seen strewn around the area.The blast took place at around 3.26 p.m. Thursday when a CRPF convoy of more than 70 vehicles was moving through Lethpora, near the saffron town of Pampore. More than 2,500 personnel of the force, many of them returning from leave to re-join duty in Kashmir, were travelling in the convoy when they were ambushed on the highway.The JeM militant outfit had claimed responsibility for the attack and identified the bomber as Adil Ahmad Dar alias Waqas Commando, a resident of Pulwama district. A purported video of the militant recorded before the attack went viral on social media.Recalling the attack, locals, mostly shopkeepers on the highway, said they first heard a loud bang which was followed by firing.A local resident said he was returning home when he suddenly heard a loud explosion.“It shook the entire area…I thought it is the end. I came out on highway and saw that two vehicles had been tossed away and burning,” he said.Many drivers, he said, left their vehicles on the highway and ran for their lives.To mourn the killing of the bomber Aadil Ahmad, parts of Pulwama district including Awantipora, Kakapora and Pampore observed complete shutdown.The Internet service remained blocked in southern districts of Kashmir for the second consecutive day.