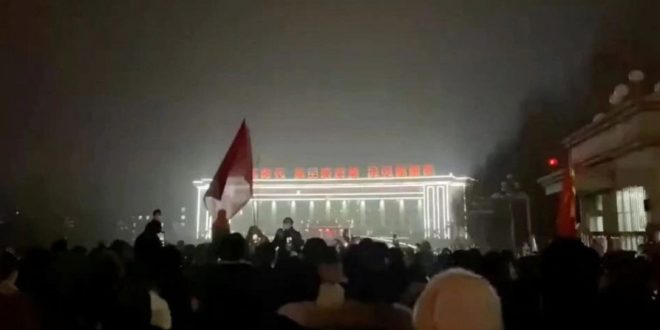 Protests erupt over COVID curbs after deadly fire in China

BEIJING: A fire that killed 10 people in China’s Xinjiang region has sparked anger at the zero-COVID policy as Beijing faces increasing public disapproval over its hardline approach to stopping the spread of the coronavirus. 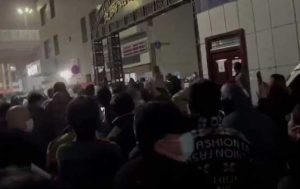 On Thursday night, 10 people were killed and nine injured after a fire in a residential building in the northwest region’s capital Urumqi, the state news agency Xinhua reported.

Chinese and overseas social media posts which have emerged since Friday claimed rescue attempts were hampered because of COVID lockdowns, and that residents could not escape in time.

China’s COVID policy has led to public frustration and some videos appeared to show crowds of people protesting against the policy in the streets of Urumqi, following demonstrations in other cities.

China has put the vast Xinjiang region, home to 10 million Uighurs, under some of the country’s longest lockdowns, with many of Urumqi’s four million residents barred from leaving their homes for as long as 100 days.

While the rest of the world is living with COVID-19, China has stuck with a strict “zero-COVID” strategy that relies on snap lockdowns, mass testing, lengthy quarantines, and border controls to stamp out the virus wherever it pops up. 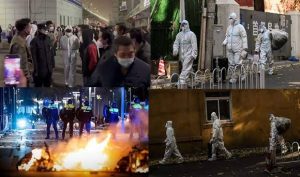 Videos of the protests have been circulating online. One showed people in a plaza singing China’s national anthem with its lyric: “Rise up, those who refuse to be slaves!”, while others shouted they wanted to be released from lockdowns.

Another video shows dozens of people marching through a neighborhood in the east of the city, shouting the same slogan before confronting a line of hazmat-clad officials and security personnel.

Posts on the Chinese social media platform Weibo said rescue vehicles were unable to get past electric cars to get to the residential building which was on fire. Rescue workers and residents were unable to move the cars which had not been charged because of the lockdowns.

Urumqi police said in a Friday post on Weibo they detained a woman for “spreading online rumours” relating to the number of casualties from the blaze. 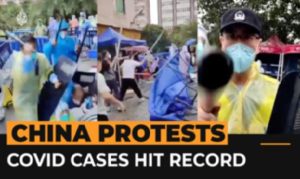 “Some residents’ ability to rescue themselves was too weak … and they failed to escape in time,” Wensheng said but social media posts showed many residents were locked in their homes because of COVID-19 controls.

China on Friday reported more than 32,000 infections in the past 24 hours, up from more than 31,000 reported on Thursday. The vast majority of the cases have been asymptomatic.

The numbers on Thursday and Friday surpassed a previous record set in April of just under 30,000 cases. That surge resulted in the commercial hub of Shanghai, home to 25 million people, being placed under lockdown which lasted for two months.

The newest wave has been accompanied by restrictions which have slowly tightened across the country. (Int’l News Desk)