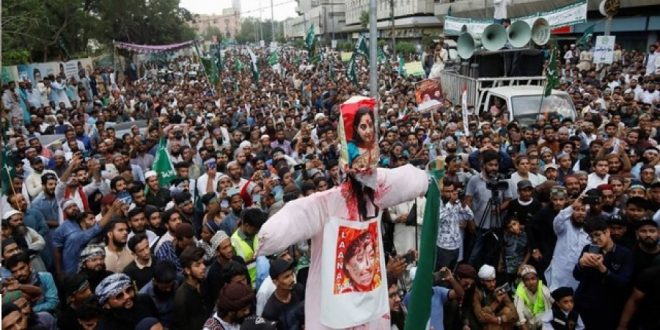 NEW DELHI: Prime Minister Narendra Modi’s government has faced a backlash from Muslims at home and abroad, including from a number of Gulf countries, after two officials from his Bharatiya Janata Party (BJP) commented in late May and earlier this month on the prophet’s private life. 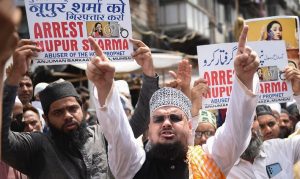 One of them, spokeswoman Nupur Sharma’s remarks sparked uproar among Muslims in India and triggered diplomatic protests from Islamic countries demanding an apology from the Indian government.

Sharma has been suspended from the party while another, Naveen Kumar Jindal, was expelled.

That has not calmed anger in the latest instance of what some in the minority Muslim community see as increased pressure under the rule of the Hindu nationalist BJP on issues ranging from freedom of worship to the wearing of hijab head scarves.

Police in New Delhi said they have filed a complaint against Sharma and others for “inciting people on divisive lines” on social media.

Police confronted stone-pelting crowds in many Indian cities as crowds protested in many areas of the country over derogatory remarks about the Prophet Mohammad made by two former members of the ruling party.

Meanwhile, “the global Muslim community has been united. We ask the whole world to boycott 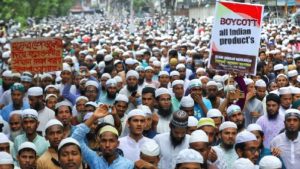 Indian products,” said Moulana Imtiaz Alam, leader of Islami Andolan Bangladesh, a grouping of Islamist parties that support the introduction of Islamic law in the country.

Thousands of people marched in Bangladesh’s capital and in parts of India on Friday to urge Muslim-majority nations to cut ties with India and boycott its products unless it punishes two governing party officials for comments deemed derogatory to Islam’s Prophet Muhammad.

Muslims have been protesting about comments made recently by two officials from Prime Minister Narendra Modi’s Bharatiya Janata Party (BJP) about the Prophet’s private life, with the demonstrations often turning into violence between Hindus and Muslims

India’s ruling BJP said on Sunday it had suspended BJP spokeswoman Nupur Sharma in response to comments she made during a TV debate about the Prophet Mohammed.

The BJP said in a statement on its website that the party respected all religions. “The BJP strongly denounces insult of any religious personalities of any religion.” 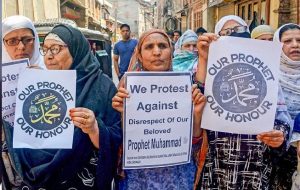 Sharma said on Twitter she had said some things in response to comments made about a Hindu god but it was never an intention to hurt anyone’s religious feelings.

Earlier two teenagers were killed on Friday in clashes between Hindus and Muslims in eastern India that followed derogatory remarks about the Prophet Mohammad by two ruling party officials, police said on Saturday.

Police opened fire to break up the violence in the city of Ranchi in Jharkhand state but it was not clear if the two victims were killed by the police or by rioters.

Senior police official Surendra Kumar Jha said at least 14 police officials were injured in the incident in Ranchi and other areas. A curfew was imposed and Internet services suspended to stop the unrest escalating.

Share
Previous Runways unusable after Israel hits airport: Syria
Next ‘Not yet’ decided on trip to Saudi Arabia: Biden