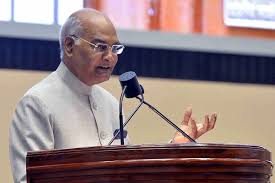 Prez did not talk about poor: TRS MP

Talking to reporters after Parliament adjourned,  the TRS leader expressed grief stating that Ramnath Kovind failed to touch upon the issues of the poor in the country in his speech. The Telangana Government’s Rythu Bandhu scheme has become a debatable issue across the nation. Many States are replicating the scheme and English Television channels are conducting debates continuously on the issue, he claimed.

He said there was nothing new in the President’s address and the Modi Government has miserably failed to meet the expectations of the people. There was no need to respond on the vote on account budget of the Centre as it failed in all sectors during five-year Modi rule, he fumed. Despite a new State, Telangana launched several new schemes of welfare, which were being talked about across the country. The new State achieved several projects through struggle in five years, he added. (PMI)