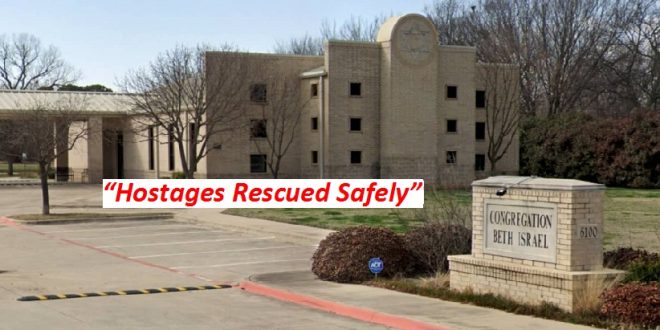 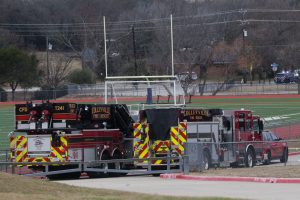 COLLEYVILLE/ TEXAS: Police were negotiating with a man believed to have taken people hostage at a synagogue in Colleyville, Texas, during a religious service on Saturday that was being broadcast online.

The Colleyville Police Department said Federal Bureau of Investigation (FBI) negotiators remained in contact with the hostage taker late Saturday afternoon, after a male hostage was released uninjured more than six hours after the crisis began.

Other hostages were still being held.

The police said it had evacuated residents from the area around Congregation Beth Israel as it deployed Special Weapons and Tactics (SWAT) teams after responding to an emergency call at 10:41 a.m. No injuries have been reported and it remained unclear what weapons, if any, the man had.

There were initially four hostages, including the rabbi, according to a person familiar with the situation who was not authorized to speak publicly. 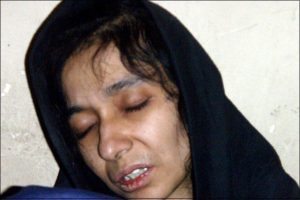 The man could be heard having a one-sided conversation in what appeared to be a phone call during a Facebook Livestream of the Shabbat service of the Reform Jewish synagogue in Colleyville, which is about 16 miles (26 km) northeast of Fort Worth. The Livestream cut off around 3 p.m. EST (2000 GMT).

President Joe Biden has been briefed on the “developing hostage situation,” his press secretary said. Israeli Prime Minister Naftali Bennett said on Twitter that he was monitoring the situation and was praying for the safety of the hostages.

Texas Governor Greg Abbott said officials from the state’s Department of Public Safety were also on the scene working to get “the best and safest outcome.” 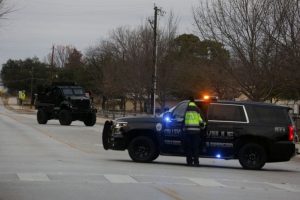 Barry Klompus, a member of the congregation since it opened in 1999, said he tuned into the Livestream.

“It was horrible listening and watching, and it’s that much more horrible not knowing,” Klompus said in a telephone interview.

A US official briefed on the matter told ABC News the hostage-taker claims to be the brother of Pakistani neuroscientist Aafia Siddiqui, who is serving an 86-year US prison sentence on her 2010 conviction for shooting at soldiers and FBI agents, and demanding she be freed but authorities have not yet confirmed his identity, the official told ABC News.

Siddiqui is being held at a federal prison in the Fort Worth area.

The president of the Union for Reform Judaism, Rabbi Rick Jacobs, said on Twitter the union was “very grateful to law enforcement who are working to free the hostages.” The Anti-Defamation 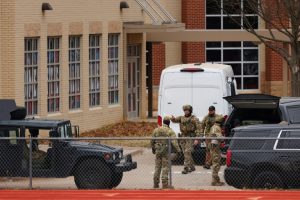 League, a Jewish advocacy group, said it was aware of the standoff, and the Council on American-Islamic Relations (CAIR), a US Muslim advocacy group, condemned the man’s actions.

“This latest anti-Semitic attack on Jewish Americans worshipping at a synagogue is an act of pure evil,” CAIR said in a statement.

Klompus said he did not know of any significant previous threats to the congregation.

“We don’t have a security officer on staff but we have what I would say is a very good relationship with the local police,” he said.

Meanwhile, hours after a man who claimed to have weapons and explosives took a rabbi and several others hostage at a synagogue in the Dallas-Fort Worth area, all the hostages had been rescued, Gov. Greg Abbott of Texas said on Saturday night.

“Prayers answered,” Abbott said on Twitter. “All hostages are out alive and safe.” 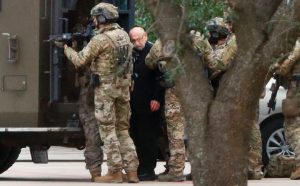 Jerry Moore, who lives across from the synagogue, said his family heard a loud bang and what appeared to be gunshots, “and it seemed like it was lit up over there and you could obviously tell something was going on.”

It wasn’t immediately clear what had happened to the man who had taken the hostages during a morning service at Congregation Beth Israel, a Reform synagogue in Colleyville, Texas.

“He will continue to receive updates from his senior team as the situation develops,” Ms. Psaki said on Twitter. “Senior members of the national security team are also in touch with federal law enforcement leadership.”

Eugene Posnock, a member of the synagogue, said that she and other members had been following the service on Zoom when the man entered the sanctuary, disrupting prayers.