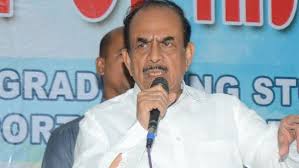 Hyderabad, 23rd October 2022: The Telangana Home Minister, Mohammed Mehmood Ali on Friday said that the police force in the State remains on alert to foil any attempts by the extremists and terrorists to revive their activities. He said the police force was working hard to stop any activity by extremists, terrorists, anti-social elements, communal forces, and “white-collar” criminals. The Home Minister was addressing the police flag day parade (commemoration parade) at Police Martyrs’ Memorial in Hyderabad. He along with Director General of Police M Mahender Reddy and other top officials paid tributes to policemen who laid down their lives in the line of duty during the last year. Mehmood Ali said a country or a state can progress if the law and order are maintained. If there is no peace, this gives rise to a sense of insecurity among people and hampers development, affects investment, and ultimately leads to an increase in poverty. The minister claimed that during the last eight years, the Telangana government ensured communal harmony in Hyderabad by preventing any communal tensions. He praised the manner in which police handled the recent Ganesh immersion, Bonalu, and Bathukamma festivals. He assured the police that the government will provide more facilities to them to help discharge their duties effectively and efficiently. The DGP claimed that Telangana police is at the forefront in the use of technology to maintain peace and law and order. He said with the slogan of one state, one service, the state police were serving with accountability and transparency in a friendly environment. He said the police were working with the aim to have 15 lakh CCTV cameras across the state. To check cybercrime, the police are implementing CCTNS 2.0 based on futuristic technologies besides setting up of Indian Cyber Crime Coordination Centre (I4C)