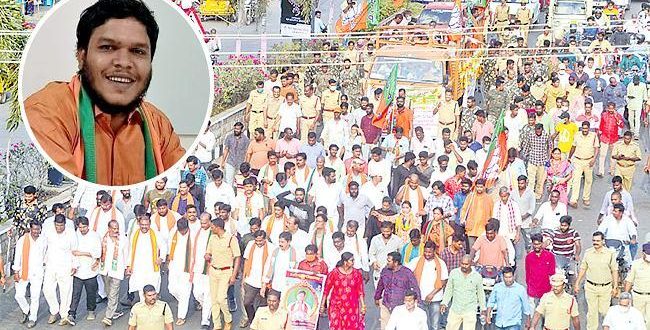 KHAMM ‘AMApril 17; A BJP worker named Samineni Sai Ganesh (25), who allegedly attempted suicide two days ago in Khammam town of Telangana, passed away on Saturday while undergoing treatment at a hospital in Hyderabad. The Khammam BJP leaders said that the police had filed more than 16 cases against him. As he was upset over police harassment and a rowdy sheet being opened against allegedly at the behest of TRS Minister Puvvada Ajay Kumar, he resorted to this extreme step, they said.

After getting to know about his death, the BJP workers stage protests, which turned violent. They allegedly broke the mirror of an RTC bus and a glass door of a hospital. Tensions were rife as BJP activists went on a rampage and set fire to flexi and cutouts of Minister Puvvada Ajay and other TRS leaders, and in return TRS activists also launched a counterattack on them. Several BJP leaders and TRS activists were injured. Two constables were also injured in the incident. Police were called and they set up heavy security in Khammam and the situation was brought under control.

Saiganesh was upset that the police were harassing him to come to the station frequently and that they had threatened him that no one could save him if went outside. On the 14th of this month, he drank pesticide on the premises of the Three Town Police Station. Police rushed him to a government hospital and later to a local private hospital in Hyderabad on Friday afternoon, as his condition deteriorated. He succumbed while undergoing treatment on Saturday morning. Police shifted the body to Khammam at 12.40 pm. A large number of BJP activists rushed to the Khammam Government House and staged protests. This led to a delay in the postmortem which did not take place till 3 pm. Police were deployed at the main entrance of the hospital to ensure no untoward incidents takes place.

Saiganesh lost his father Venkateswara Rao in his childhood and his mother Manjula also passed away last year. His relatives had found a match for Saiganesh and the wedding date was finalized on May 4. Even as the arrangements for his wedding were going on, his sudden death left a pall of gloom in his family. Meanwhile, BJP activists in the town blamed the TRS Minister, a local corporator Kannam Vaishnavi’s husband Prasanna Krishna and police harassment for Saiganesh’s death. His funeral procession and final rites were conducted amid tight police security.