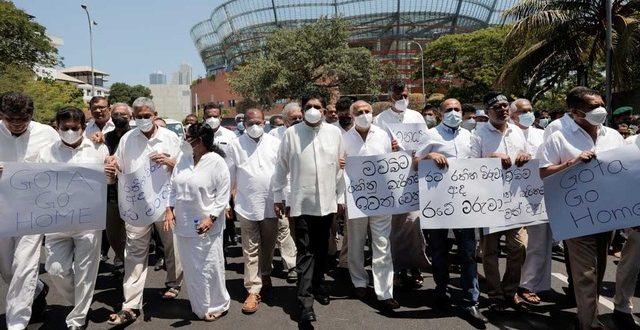 COLOMBO: Police in Sri Lanka have fired tear gas and water cannon to disperse student-led protests near the country’s second-biggest city, Kandy, amid growing calls for President Gotabaya Rajapaksa’s resignation over an economic crisis that has resulted in shortages of fuel, food and other essentials. 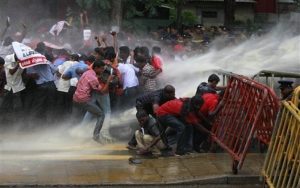 Hundreds of students defied a curfew to take part in Sunday’s protest, chanting “Go home, Gota”, referring to the president’s nickname, as they walked out of the University of Peradeniya and headed to the centre of Kandy but police stopped them soon after they left the university premises.

“The people have lost faith in the Gotabaya Rajapaksa’s government,” said one student, who wished to remain anonymous over security concerns. “We dispersed because we don’t want any violence and because a lot of female students were with us. But we will be back and then it won’t be so easy to disperse us.”

The Peradeniya rally was the latest display of dissent against Rajapaksa, who declared a state of emergency on Friday and imposed a 36-hour curfew that began at 6pm (12:30 GMT) on Saturday to quell unrest over the country’s worst economic crisis in decades.

The curfew is to run until 6am (00:30 GMT) on Monday but just within the first 12 hours of the curfew, some 664 people had been detained for violating the measure, and despite the crackdown 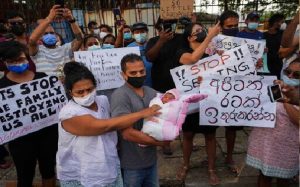 in Peradeniya, scattered protests were reported across the country throughout the day, including in the capital, Colombo.

Authorities also blocked access to social media platforms on Sunday, in moves widely seen as a bid to prevent nationwide protests that had been planned for later in the day. The telecoms regulator said the defence ministry had ordered a block on Facebook, Instagram, Twitter and YouTube, as well as the messaging platforms WhatsApp and Viber in “order to maintain calm” but amid opposition to the move, including from Minister of Youth and Sports Namal Rajapaksa, who is the president’s nephew, the blackout was eased by Sunday afternoon.

The minister had said in a Twitter post that he would “never condone the blocking of social media” and urged “authorities to think more progressively and reconsider this decision”.

NetBlocks, a global monitoring group, said the blackout had last about 16 hours and confirmed in a Twitter post that access to the social media platforms and messaging apps was being restored. 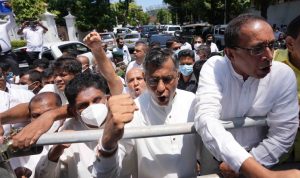 have called its worst economic emergency since independence from the United Kingdom. Sparked by a foreign exchange crisis, the downturn has left the government unable to pay for imports of fuel, food, medicine and other essentials and resulted in rolling blackouts for up to 10 hours.

Sri Lankans have been staging small, peaceful protests over these economic woes throughout March, but when the government announced a power cut of up to 13 hours on Thursday, hundreds took to the streets near the president’s private residence in Colombo, with some attempting to push through the barricades leading to the building.

Clashes ensued, with protesters setting fire to several military vehicles and police arresting 54 people. All but six have since been released.

On Friday, police also arrested prominent activist Thisara Anurudhdha Bandara, who was the 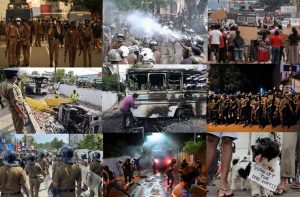 administrator of a popular Facebook group called “Go Home Gota”. He was accused of inciting public unrest, but his lawyer Malaka Palliyaguruge described Bandara’s arrest as an attempt at clamping down on freedom of expression.

“The government can’t arrest people for saying ‘Gota go home,’ and there is no evidence to say violence has been incited,” the lawyer told Al Jazeera.

Bandara was released on bail on Saturday amid a huge outpouring of public support, including from the country’s human rights commission, which launched an investigation into the police’s actions. (Int’l News Desk)