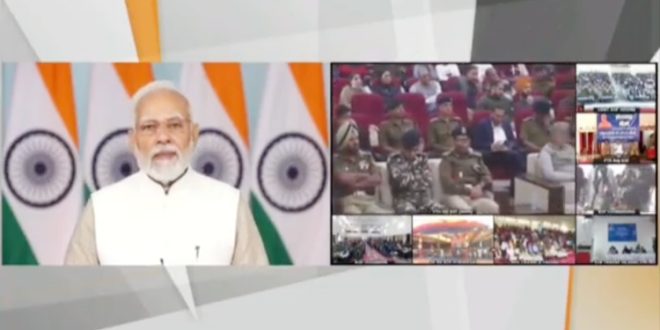 New Delhi’Nov’22’2022-Prime Minister Narendra Modi today distributed over 71 thousand appointment letters to newly inducted recruits through video conferencing at 45 locations across the country. Prime Minister also launched the Karmayogi Prarambh module. The module is an online orientation course for all new appointees. The module includes a code of conduct for government servants, workplace ethics, integrity, and human resource policies. Through this module, appointees will get an opportunity to explore other courses on igotkarmayogi.gov.in platform to enhance their knowledge, skills, and competencies.

Addressing the new appointees, Prime Minister Narendra Modi said, the government is working in mission mode to provide government jobs. He said, several rojgar melas have been organized in various states and this campaign will continue in the future.

Terming Youth the biggest strength of the country, the Prime Minister said, the government is giving top priority to utilizing their talent and energy. He urged the new recruits to gain knowledge, develop skills and focus on capacity building to increase their efficiencies. He said, the ‘Karmayogi Bharat’ technology platform has several online courses which will help in the career progress of new recruits.

On India’s efforts to become a developed country in the coming decades, Mr. Modi said, experts around the world are optimistic about the country’s growth trajectory. He said, the country has the potential to become a manufacturing hub of the world. He stressed that skilled manpower will play an important role in this direction. He said, new job opportunities in the government and private sector are continuously increasing due to the efforts of the government. He said, Production Linked Incentive Scheme, Make In India, Local for Global, Startups, and Drone and Space Sectors have the potential to create several new job opportunities for the youth.

On this occasion, Minister of State for Personnel, Public Grievances, and Pensions, Dr. Jitendra Singh said, this government has given priorities to those sections of the society which were neglected by the past governments. He said, it was committed by Prime Minister Narendra Modi that 10 lakh personnel will be recruited. He said, in the first tranche, appointment letters for various posts of Central Government were handed over to 75 thousand newly inducted appointees last month. During the second tranche, appointment letters were handed over for several posts including Central Armed Police Force, Constable, Income Tax Inspectors, teachers, lecturers, nurses, nursing officers, doctors, pharmacists, radiographers, and other technical and paramedical posts.