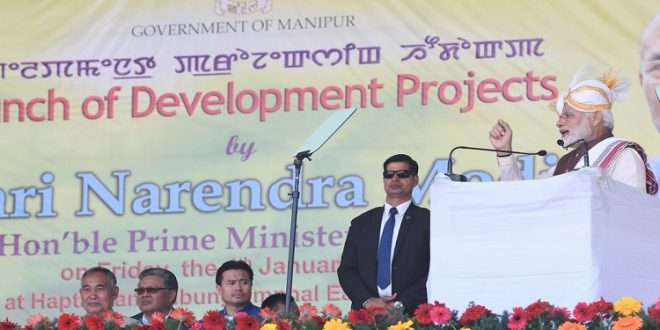 New delhi 4 jan(news net) PM Narendra Modi inaugurated and laid oundation stone of 12 development projects worth Rs 1,500 crore in Manipur today. While addressing a public rally in Imphal, Prime Minister said he has visited the Northeast region nearly 30 times in last 4.5 years and he really like talking and meeting people there.

Prime Minister Modi said its because of the negligence of past governments in Manipur that the project worth 19 or 20 crores has to be completed at the cost of 500 crores now . He said NDA  government is going to change this laid-back nature.

The Prime Minister said many sportspersons from Manipur made India proud on national and international level.  Prime Minister said as per the Centre’s vision of Sabka Saath Sabka Vikas, it is ensured that no region or person is excluded from development.

In the evening, Prime Minister Narendra Modi is scheduled to address Vijay Samkalp Samavesh at Silchar in Southern Assam. This is his first visit to Barak Valley as Prime Minister.