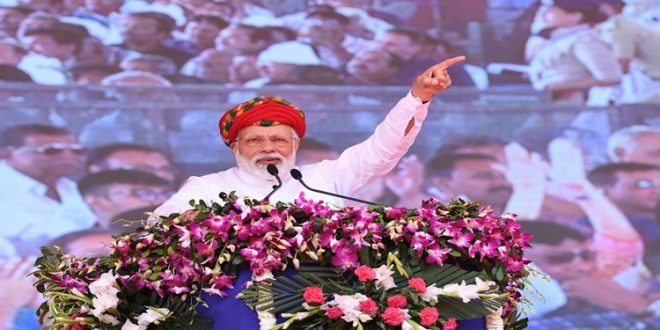 Prime Minister Narendra Modi today asked Opposition to stop questioning the valour of our armed forces. Speaking after inaugurating various development projects in Jamnagar, Gujarat, he said, the entire nation agrees that the menace of terror has to be eliminated. He said, we should be proud of our armed forces. Mr Modi said that if India had Rafael aircraft during the recent airstrike on terrorist camps, then the result would have been more positive for us.

Referring to Ayushman Bharat, the Prime Minister said, India is home to one of the biggest healthcare programmes in the world and the coming of this initiative ensures top quality and affordable healthcare for the poor. He said, Gujarat has witnessed a revolution in the health sector in last many years and hospitals with modern facilities are coming up across the state. The Prime Minister stressed on the needs for the structural and long term measures to overcome the challenges the country is fancing.

Mr Modi said, for many years, there was an issue of water shortage in Gujarat and the state has been drought prone. Mr Modi however said, the Sardar Sarovar Dam has brought much relief to the people of the state. He said, this project was completed despite neglect from earlier state governments and adversities from various quarters.

Earlier, Mr Modi inaugurated 750 beds Annexe of Guru Gobind Singh Hospital in Jamnagar, Gujarat. During his two day visit to the state, the Prime Minister has also inaugurated the newly built PG hostel of the hospital. Mr Modi also visited the Hospital complex and interacted with students and faculty.

Prime Minister has also unveiled the Saurashra Narmada Avtaran Irrigation- SAUNI projects at the venue through the press of a button. This project includes Und-1 to RanjitSagar Lift irrigation Scheme and Machu-1 to Nyari Lift Irrigation scheme. Prime Minister also laid the foundation stone of Jodiya Desalination Plant and Und-3 to Venu-2 Lift Irrigation scheme. He has also flagged off Bandra- Jamnagar Humsafar Express through a video link.

Besides it, the Prime Minister also inaugurated the 51 kilometer pipeline from Aaji-3 to Khijadia by unveiling the plaque. He laid the foundation stone of Rajkot-Kanalus Railway Line doubling project. Prime Minister has also handed over keys to the beneficiaries to mark the dedication of 448 houses constructed by Jamnagar Municipal Corporation and 1008 flats constructed by Jamnagar Area Development Authority.

Post Views: 390
Share
Previous Two Days National Seminar on 6-7th March by Dept of Persian: Maulana Azad National Urdu University
Next India is firmly committed to peace but if needed can use all its might to protect its sovereign: President