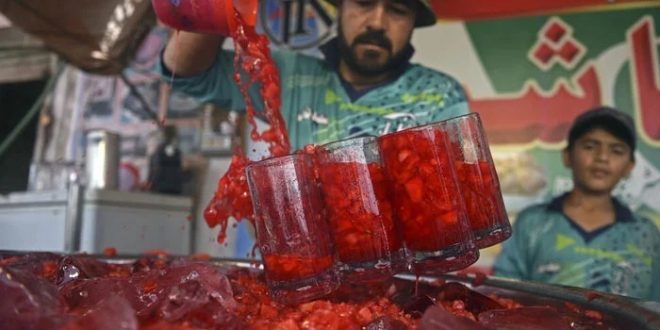 NEW DELHI: Pakistan and India have fought three wars and countless skirmishes, but as summers get hotter with climate change, their peoples are united by love for a cooling 115-year-old pink libation with a secret recipe. 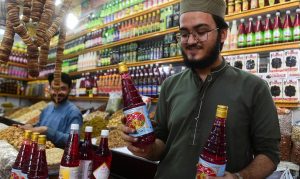 The ultra-sweet concoction of herbs and fruits, Rooh Afza which translates as “refresher of the soul” has not only survived the 1947 partition of the two countries but thrived on both sides of the border.

On a furnace-hot recent day in Old Delhi, the formidable vendor Firoza chops up in a metal cauldron an ice block delivered to her by motorbike down the tight alleyways.

She then stabs the top of a bottle of Rooh Afza and squeezes in the viscous, lipstick-red concentrate before attacking a milk carton and adding that too, along with pieces of watermelon.

This is the 50-year-old’s own special version, “Sharbat e Mohabbat” (“Drink of Love”) every vendor has their own which she sells for 20 rupees ($0.25) per plastic goblet.

“We use more than 12 bottles of Rooh Afza and 20 boxes of milk, even 30 at times, and up to 40 when business is good,” she told media in her booming voice, hoarse from hawking her elixir.

“I took over this shop a decade ago when my husband passed away. He started selling Rooh Afza here some 40-50 years ago. It’s my only source of income.” 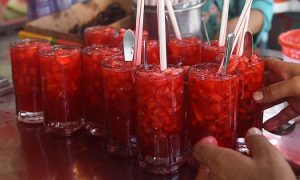 Topped with a date

In Pakistan, the drink is a particular favorite in the holy month of Ramadan, when it is served as an evening thirst-quencher with the Iftar feast, when Muslims break their fast but served in desserts, milk and custards, it remains popular throughout Pakistan’s summer season, during which temperatures hit 50 degrees Celsius (122 degrees Fahrenheit) earlier this year.

At one roadside stall in the megacity of Karachi, owner Muhammad Akram handles a hectic cash flow of dog-eared banknotes proffered by eager customers.

“A homeless man once suggested that if I blended Rooh Afza with diced watermelon it would be delicious,” he told media. “The taste was marvellous.”

At the same stall, Abdul Qahar works 12-hour shifts commanding a dozen staff serving tankards of Rooh Afza brimming with chunks of ruby watermelon, topped with a date and speared with a straw. 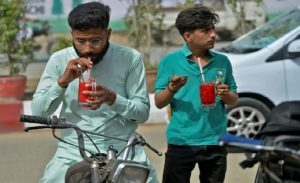 “It soothes the spirit,” said 25-year-old housewife Neelam Fareed, who travelled five kilometres (three miles) on a moped with her husband just for a drink.

Rooh Afza was first sold in 1907 in Old Delhi, the congested heart of the Indian capital, by Hakim Hafiz Abdul Majeed, a traditional healing practitioner.

In 1947, with the partition of British India, one son stayed in Delhi while the other upped sticks for the new Pakistan.

They set up factories in each country as well as one in East Pakistan, which became Bangladesh in 1971 after a bloody independence war under two firms, Hamdard India and Hamdard Pakistan.

Hamid Ahmed, the great-grandson of the founder, who runs the Indian business, said the recipe had not changed in the last 115 years.

“It’s a big secret; even the people at the factory will not know it… There would be, I think, three people who would know it,” the 45-year-old told AFP with a chuckle. 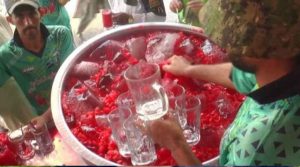 Apart from being served ice cold, the drink’s blend of fruits and herbs is thought to help with the northern subcontinent’s dusty summer winds, known as the loo.

Since South Asia is suffering ever-hotter summers, a phenomenon blamed on climate change, the future is bright, for Hamdard’s business prospects at least.

“I think with global warming, temperatures are increasing… the relevance of Rooh Afza is not going anywhere soon,” Ahmed told media.