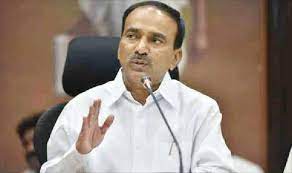 Hyderabad, June 14 (PMI):  BJP MLA Etala Rajender today said people in the State want to see BJP to come into power in Telangana.Addressing party workers in Siddipet district to celebrate the 8-year-long rule of Prime Minister Narendra Modi, Etala said there was a big difference between CM KCR and separate Telangana struggle leader KCR. He recalled that the youth in the State used to cheer KCR during the separate State struggle and added that the same youth were now showing hatred towards him now.

He mocked that the ruling TRS party should take VRS now and added that he was thrown away of the party and not abandoned it. He said he resigned from his post after he was provoked to do so by the ruling party leaders and added that he tendered his resignation for his self-respect. He also mocked that KCR made his nephew Santosh Kumar as Rajya Sabha MP for feeding him medicines on time. Commenting on the formation of a national political party by KCR, he asked the CM if he was planning to form his national political party in order to take the pub culture of the State to the entire country. (PMI)