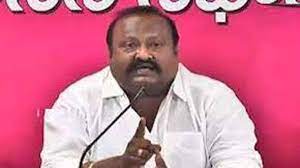 Karimnagar, June 13 (PMI): Minister for Civil Supply Gangula Kamalakar said that a big dabate had started across the country after TRS president K Chandrashekar Rao’s announcement of his proposal to float a Bharatiya Rashtra Samithi (BRS) at the national level and Indians are now seeking KCR to lead the country.

Speaking to the media after inaugurating a market renovated at the cost of Rs. 35 lakhs as part of the Pattana Pragathi programme here on Monday, Gangula Kamalakar said that people are looking at the leadership of KCR and majority of the people feel that TRS is only an alternative force to Bharatiya Janata Party.

With the launch of Pattana Pragathi programme, all long pending issues area being resolved and development is clearly visible everywhere. In Karimnagar town, a total of 23 toilets were already set up at various places and the government is also planning to set up the dedicated pink toilets for women in the town soon.

“Earlier, while people are passing through the toilets located at various places across the Karimnagar Municipality,  they used to receive a foul smell and used to cover their noses and mouths with kerchief. Under the Pattana Pragathi programme, all toilets have been renovated and developed in a clean and hygiene condition. People express happy at the hygiene condition of toilets and it’s maintenance by the Municipal authorities,” Kamalakar said.

Responding to the reports that he is preparing the ground for Karimnagar Lok Sabha seat in next general election, Gagula said he was an ardent supporter of KCR and would work as per the assignment given by the party supremo. (PMI)