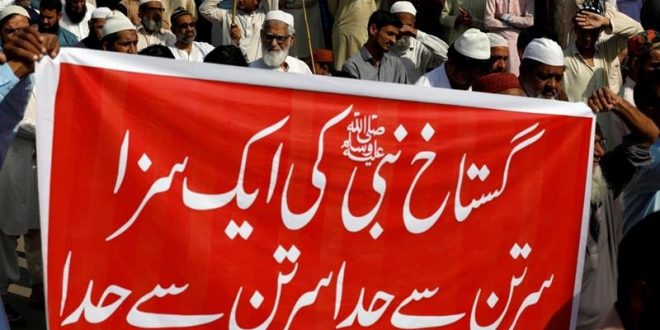 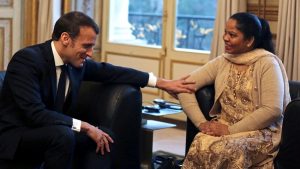 ISLAMABAD/ KARACHI/ MELBOURNE: Bishop John Joseph, 65, one of Pakistan’s most prominent human rights activists, had been campaigning for decades to reform the country’s strict blasphemy laws.

On the morning of May 6, 1998, he led a procession to the steps of the court in the central Pakistani town of Sahiwal, where a young man, Ayub Masih, had been convicted and sentenced to death for blasphemy days earlier.

Masih, an illiterate man, had been accused of quoting from Salman Rushdie’s controversial book The Satanic Verses in an argument with a Muslim man. In a controversial trial, a judge found him guilty of having insulted Islam’s prophet and sentenced him to the mandatory death penalty.

Joseph led prayers for Masih and walked protesters to the doors of the court. He then pulled out a pistol and shot himself in the head. 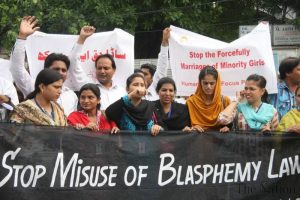 The bishop’s suicide was a striking protest against Pakistan’s harsh blasphemy laws, initially a holdover from British colonial rule that were strengthened in independent Pakistan due to pressure from the religious right wing.

In recent years, record numbers of cases are being filed under the law, which can carry a death sentence, inside or outside the courtroom. Last month, several cases were filed against members of the country’s Shia Muslim minority, who form roughly 20 percent of the country’s 207 million population.

Currently, there are about 80 convicts on death row or serving life imprisonment terms in Pakistan for committing “blasphemy”, according to (PDF) the US Commission for International Religious Freedom.

In the last decade, the “offences” committed by those accused of blasphemy have been as absurd as throwing a business card into the rubbish (the man’s name was Muhammad), a rural water dispute, spelling errors, the naming of a child, the design of a place of worship, burning a (non-religious) talisman or sharing a picture on Facebook. 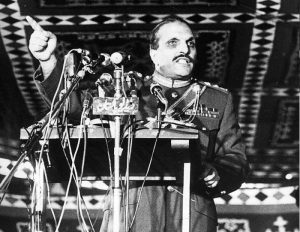 Increasingly, cases are being settled with violence outside the courtroom, with mob and targeted attacks against those accused. In many cases, families and lawyers of the accused, and even judges who have acquitted defendants have been targeted.

Since 1990, at least 77 people have been killed in connection with such accusations, the latest murder occurring in a courtroom last month.

What makes this issue so emotive in Pakistan?

‘Religious identity tied to the authority of the state’ 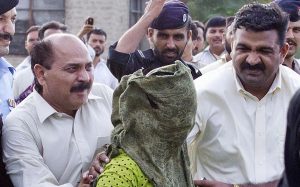 Khan argues that the heightened significance of “blasphemy” in Pakistan, as opposed to other Muslim countries (including theocracies such as Saudi Arabia and Iran), is linked to the formation of the country in 1947 as a homeland for South Asia’s Muslims.

“Religious identity has been centred as one of the core bases for national belonging in Pakistan,” he says. “When] the state has defined Islam as the ultimate source of sovereignty, such battles have taken on deeper political significance.”

When religious identity and authenticity is tied to the authority of the state, “blasphemy” becomes a site for political contestation.

“What is important in Pakistan is the jostling for position as the true, authentic and passionate representatives of Islam, that has given blasphemy accusations its real force in political life,” explains Khan. 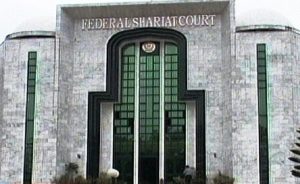 Increasingly, this has seen far-right religious parties rise to prominence campaigning explicitly on the basis of protecting the “honour” and “sanctity” of Islam and its Prophet Muhammad.

That rise can be traced to the murder of Salman Taseer, then-governor of Pakistan’s most populous Punjab province, in January 2011. Taseer had been campaigning for months to reform the country’s blasphemy laws as he sought justice for a young Christian woman, Aasia Bibi, who had been sentenced to death for the crime.

He was killed by his bodyguard, Mumtaz Qadri, for his campaign against the controversial law. Qadri was executed five years later for the shocking murder, but he was hailed as a hero, even a saint, by many in Pakistan for his act of killing a perceived blasphemer.

Two months after Taseer’s murder, a federal minister was shot dead by the Pakistan Taliban for the same reason. 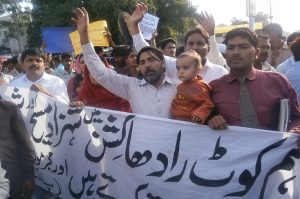 The murders, and subsequent public mobilization in support of violence in the name of the blasphemy law, gave religious parties that represented the country’s majority Sunni Muslim Barelvi sect, long sidelined from political prominence, an opportunity to regain lost political ground, say analysts.

“After Taseer’s assassination and the lionization of Mumtaz Qadri, it is clear that Barelvis begin to position themselves as the group that are the true ‘ashiq-e-Rasool’ [lovers of the Prophet] and assume the position as true representatives of Islam in the public arena through blasphemy,” says Khan.

Barelvis form roughly half of Pakistan’s population, and their beliefs are a synthesis of conservative Islam and South Asian Sufi practices, including the veneration of saints and a particular devotion to the Prophet Muhammad. 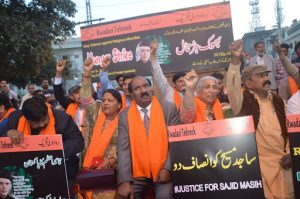 Barelvi clerics across the country taking up the issue of blasphemy to whip up public outrage, a new political party, the Tehreek-e-Labbaik Pakistan (TLP), was formed in the run-up to the 2018 general election.

The TLP led large anti-government protests over perceived “blasphemy” in 2017. Though it could not win a seat in the national parliament in the 2018 polls, it did gain the fourth-highest share of the popular vote in that general election.

“Electoral success is ultimately a secondary goal for these religious movements,” says Khan. “The aim of blasphemy politics is ultimately about defining yourself as the authentic representative of Islam in the public sphere […] which in turn forces the Pakistani state, which defines its own sovereignty in relationship to Islam, to yield to this power.” 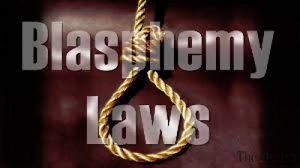 The laws, lawyers and analysts say, are treated by followers of the TLP and others who support them as “sacred”, having been laid down by God.

Pakistan inherited its blasphemy laws from its former British colonial rulers, who in 1860 introduced a set of laws related to religion in order to quell Hindu-Muslim violence in the Indian subcontinent. 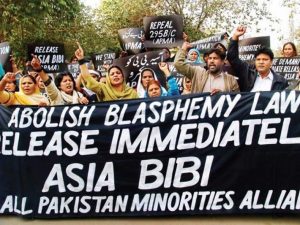 The laws were strengthened in 1927 with the addition of a vague clause to criminalize “deliberate and malicious acts intended to outrage religious feelings of any class by insulting its religion or religious believers”, in response to a high-profile case that ultimately ended in the murder of a Hindu man who published a pamphlet deemed “blasphemous” by some Muslims.

Between 1860 and 1947, when Pakistan gained independence from the British and broke away from India, there were just seven recorded cases of blasphemy, according to a report by the Centre for Research and Security Studies (CRSS).

Use of the law remained rare in the following decades, with just 10 judgments relating to offences against religion reported until 1977, according to a report by the International Commission of Jurists.

In 1974, however, then-Prime Minister Zulfiqar Ali Bhutto’s government oversaw the introduction of a constitutional amendment that declared members of the Ahmadiyya sect “non-Muslim”. 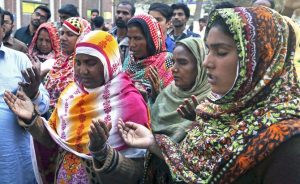 Between 1980 and 1986, the military government of General Zia-ul-Haq further strengthened the laws, adding five new clauses, all specific to Islam and criminalizing offences such as defiling the Holy Quran, insulting Islam’s Prophet or using “derogatory” language against certain religious figures.

During Haq’s rule, from 1977-1988, the number of cases skyrocketed, with more than 80 blasphemy cases filed in that period, according to the CRSS.

That trend continued through the 1990s, in particular after a controversial higher Islamic court decision in 1991 that made the imposition of the death penalty mandatory for the crime of insulting Islam’s prophet.

Between 2011 and 2015, the latest period for which consolidated data is available, there were more than 1,296 blasphemy cases filed in Pakistan. 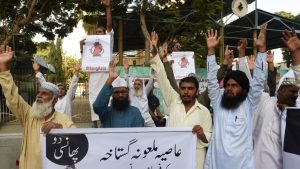 The laws are now treated as sacred, but experts say there is no clear definition of “blasphemy” in Islamic jurisprudence, nor is there agreement on the punishment for it.

“There are as many definitions and positions on blasphemy as there are Muslim countries and scholars,” says Arafat Mazhar, a filmmaker and director of the Engage Pakistan research collective. “Many Muslim countries have laws that deal with religious or sacred figures, or religion as a whole, as opposed to the very specific laws enacted in Pakistan.”

Pakistan’s laws are some of the strictest in the world, harsher and more specific than comparable laws in Saudi Arabia, Iran, Malaysia, Indonesia, Afghanistan and other countries.

Mazhar says other countries’ laws appear to be informed by the variance in Islamic scholars’ views on the issue. 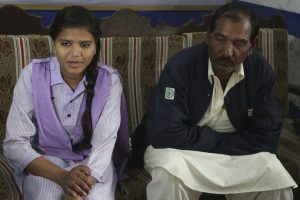 “The legislative process for [a key clause] which made the death penalty mandatory, are full of misleading and edited references to books of Islamic jurisprudence,” he says, citing several examples.

Since 2011, with the rise of a new wave of Barelvi politicians and clerics campaigning on “blasphemy”, experts say there has also been a change in the motive for blasphemy accusations.

Previously, lawyers told Al Jazeera, most accusations could be traced to pre-existing disputes between the two parties. These were often personal disputes, arguments or ongoing battles over land ownership.

In recent times, however, that has changed.

“With the rise of TLP and, in particular, the weaponization and politicization of ‘ishq-e-Rasool’, there is a greater ideological interest in blasphemy cases regardless of personal altercations,” says Mazhar.

The shift in vested interest, argues Mazhar, has now moved from being personal, between the plaintiff and the accused, to being in the interest of political and religious groups. 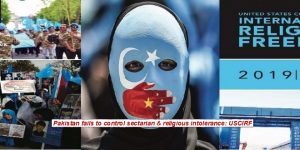 “The personal vested interest in blasphemy cases has shifted to another form of vested interest: one that is much more organised and has to do with political and social power.”

In that situation, when such groups repeatedly bring thousands onto the streets over any perceived sign that the laws may be reformed, will it ever be possible for the laws to change?

“The assassination of Punjab Governor Salmaan Taseer in 2011 turned a debate on the blasphemy law into a death sentence,” says Cyril Almeida, a senior journalist.

“Since then, even the semblance of momentum towards legislative debate has stalled and, more recently, been entirely reversed – far-right religious groups now campaign explicitly on protecting the blasphemy laws from any tampering.” 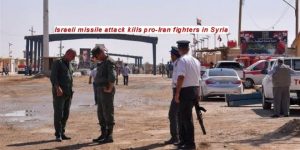 Given a vast structure designed to create public pressure on the issue of blasphemy, lower-court conviction rates for blasphemy cases remain high, even in cases where the evidence is flimsy. For Ayub Masih, over whose case Bishop John Joseph took his own life, the pendulum swung towards justice.

He was acquitted by the country’s Supreme Court in 2002, after six years in prison.

Joseph, who never lived to see that day, wrote a letter to the media on the day of his suicide, the words of which may still echo for those who continue to fight against injustice in the name of blasphemy.

“Now we must act strongly and in unity, Christians and Muslims, in order, not only, to get (Masih’s) death sentence suspended, but to get [the blasphemy laws] repealed without worrying about the sacrifice we will have to offer.

“Dedicated persons do not count the cost.”

It is once again mentioned here for record of all “anti-human, anti-freedom, anti-religion, anti-Islamic and anti-Muslim characters” especially “Hippocratic-minded Australians, Britishers and Americans that Press Media of India (PMI) and most credible Pakistani English daily “Messenger” have been highlighting and publishing the stories, research and exclusive reports on intolerance, sectarian conflicts, enforced disappearance, Shia-Muslims target killings their kidnappings and torturing particularly the killings of Shia-Muslim women and oppressions on minorities during the last over 25 years which have also been verifying, acknowledging, endorsing, proving and accepting not only by international media outlets but also by local, national and global organizations and authorities.