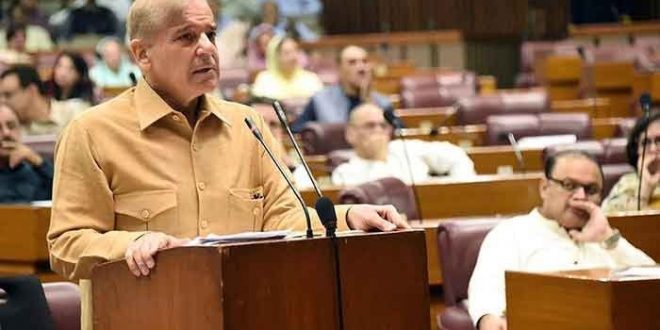 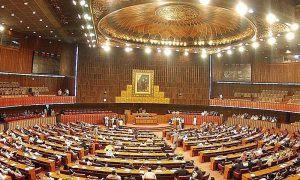 ISLAMABAD/ KARACHI: Pakistan’s parliament has elected Shebaz Sharif as the country’s new prime minister after 174 votes were cast in the 342-seat assembly.

The newly elected minister will now form a new government that can remain in place until August 2023, when general elections are due.

The newly elected prime minister said the country was on the way to posting the largest budget deficit in its history as well as historical trade and current account deficits.

In his winning speech, Sharif said that his new government was faced with the huge challenge of bringing the economy back on track following Khan’s mismanagement. 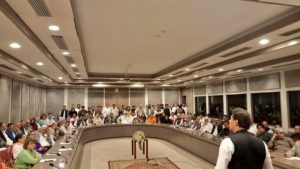 “This house is going to elect a new prime minister but everyone knows he [Sharif] is being imposed and does not have the mandate of the people,” Qureshi said. “We reject this process and also announce [a] boycott of the election for Prime Minister.”

PTI and PML-N supporters confronted each other during a rowdy demonstration outside Avenfield apartments a day after Imran Khan was voted out of power.

On instructions of Imran Khan, PTI UK’s leadership had announced that a protest will be held at Hyde Park Corner which will then march towards the American embassy but the organisers decided not to head there and instead assembled out at the Avenfield flats first and then moved from there to the Pakistan High Commission.

PTI’s supporters came from all over the UK and gathered in Hyde Park where emotional speeches were delivered for about two hours. The protestors then moved to Avenfield flats, located just five minutes away, where supporters of PML-N had already gathered to celebrate the possible election of Shahbaz Sharif as the next prime minister of Pakistan and the ouster of Imran Khan. 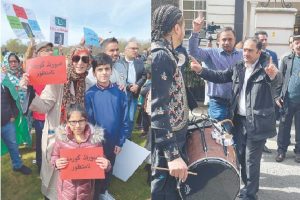 Outside the residence of Nawaz Sharif’s sons Hasan and Hussain Nawaz, supporters from both sides faced each other during a charged protest which lasted for over three hours.

PTI’s protestors raised slogans to protest the ouster of Pakistan’s former Prime Minister Imran Khan through a vote of no confidence.

PM Imran Khan was ousted on Saturday after he lost the vote of no confidence in the National Assembly. Supporters were carrying banners showing support for Imran Khan and alleging that he has been removed through a “foreign conspiracy” – a claim made by Imran Khan which has been denied by Pakistan’s top security sources.

Imran Khan’s supporters said that Imran Khan should have remained in power till 2028 and was only driven out by the “corrupt” and “sellouts” bending to pressure from the US government. They said that the US government had conspired with the Opposition parties as well as PTI’s own dissidents to remove Imran Khan from power. The protestors called Pakistan’s entire Opposition and dissident PTI lawmakers “traitors”.

PML-N workers had arranged a dhol since morning and the dholists played to the full capacity, drowning out slogans of PTI till the time they left. 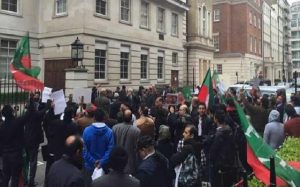 Around 50 policemen remained on the scene throughout the protest. They separated the two sides and didn’t let them come close to each other, restricting them to their columns on the street outside the Avenfield flats. PTI pelted eggs onto the PML-N crowd who responded by throwing bottles of water toward the PTI’s gathering.

PTI leaders didn’t explain why they decided not to go to the US embassy for the protest as originally planned.

PTI workers raised slogans saying “imported government not accepted”, “No Imran, no remittances”, “traitors”, and “no to regime change,” while PML-N supporters responded by chanting “losers, losers”, “Aleema Baaji is a thief” and “arrest Farah Gogi”.

In his first speech in the National Assembly as the prime minister of Pakistan, Shehbaz Sharif Monday raised the minimum wage of government employees to Rs25,000 which is applicable from April 1.

Following the ouster of PTI chairman Imran Khan from the office of the prime minister, the Opposition’s joint candidate Shehbaz Sharif was elected as the 23rd premier of Pakistan today. 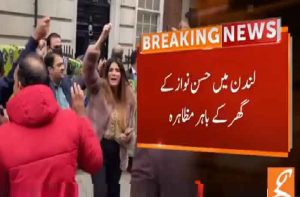 Shehbaz secured 174 votes as opposed to PTI’s candidate Shah Mahmood Qureshi, who received no votes after his party decided to boycott the polling process.

The premier mentioned that it was for the first time in the history of Pakistan that a prime minister was ousted through the no-confidence motion.

‘We need to wash out the effects of previous govt’

Regarding the economy of Pakistan, Shahbaz said if Pakistan were to progress, then it needs to be self-sufficient on the financial front.

“…we will need to protect and respect the nation as neither was anyone a traitor nor are they traitors now,” the prime minister said, noting if Pakistan’s economy were to move forward, then, the government will have to use “dialogue” and not move towards a deadlock.

PM Shehbaz Sharif said hard work was required for Pakistan’s progress as if only statements could move the country forward, then during PTI’s tenure, “we would have been among the leading nations.” 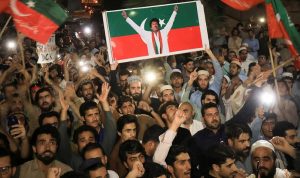 “We will need to wash out the effects of the previous government by working together, otherwise, we will fail (…) our economy is in a bad situation right now,” the prime minister said.

Shehbaz said the new government would take steps to make Pakistan an “investment heaven” for investors as he noted their capital would help the country move forward.

He announced that despite Punjab “being the elder brother” if all the other provinces remain behind in terms of development, then it is not Pakistan’s development, it was just a single province’s development.

“…this servant of Pakistan vows to make sure that Pakistan will develop and not just Punjab,” Shehbaz said.

He said the government would reintroduce the Benazir Card and interlink it with the education sector in a bid to facilitate people whose children go to school.

“Our children should be equipped with great knowledge […] we will reintroduce this program with consultation,” he said and lashed out at the PTI government for discontinuing it. 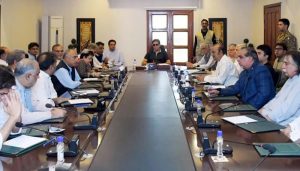 “They say that this letter came to them on March 7, but our decisions were made way before that, so, if [what the previous government claimed] is a lie, then the matter should be disclosed transparently before the public,” he said.

Therefore, PM Shehbaz Sharif announced that the parliament’s security committee would be given a briefing on the “threat letter” to the members of the committee in presence of the armed forces personnel and bureaucrats, the director-general Inter-Services Intelligence, foreign secretary, and the ambassador who wrote it, who has now been transferred to Brussels.

“If there’s an iota of evidence that we were backed by foreign conspirators […] then with you Mr. Speaker and God as my witness, I will not think for another second and resign from the office of the prime minister,” PM Shehbaz Sharif said, vowing to hold an in-camera session of the security committee at the earliest.

The prime minister thanked his brother and ex-premier Nawaz Sharif for his support, while also lauding social media activists, press clubs, media houses, and lawyers for backing the Opposition’s struggle for democracy.

Share
Previous US warns India on imports of Russian energy
Next Tens of thousands killed in besieged Mariupol: Zelenskyy