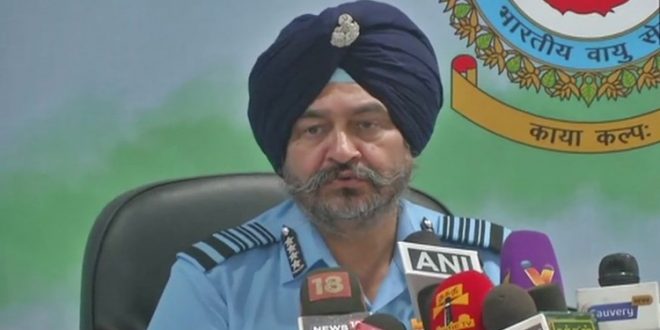 ndian Air Force chief Air Chief Marshal Birendar Singh Dhanoa has dismissed reports that the February 26 air-borne Balakot strike missed to hit the terror targets. He participated in the ceremony to present the President’s Colours to the Sulur-based 5 Base Repair Depot near Coimbatore this morning. Later, talking to the press, the Air Chief Marshal said Pakistan tried to retaliate only because the Indian Air Force operation has been successful. He said the number of casualties due to such operations would be disclosed only by the Government, as the Air Force does not assess the exact numbers of casualties.

He said the Mig-21 Bison has been involved in the operation against intruding F-16 aircraft of Pakistan as they have been upgraded to the level of a 3.5 generation asset. When asked if Wing Commander Abhinandan would be allowed to fly again, he explained that it would depend on his physical fitness post his ejection from the Mig-21, that normally takes a heavy toll on the pilot’s body.

Post Views: 256
Share
Previous India is firmly committed to peace but if needed can use all its might to protect its sovereign: President
Next Iran keeping to nuclear deal, says Head of UN nuclear agency