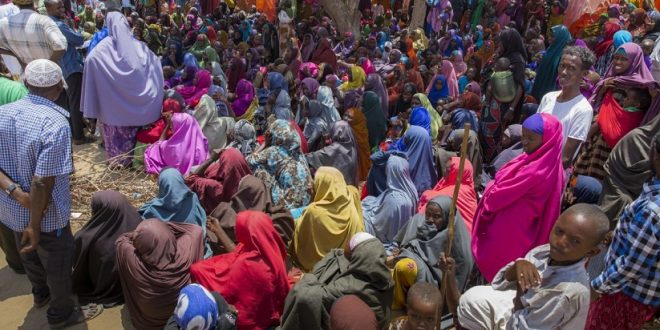 UNITED NATIONS: More than 100 million people have been forced to flee their homes due to conflict, climate change and persecution, according to a newly released global trends report by UNHCR.

The UN has warned that the ongoing food crisis following Russia’s invasion of Ukraine could force even more to flee their homes.

To put that in context, if the number of forcibly displaced people was a country, it would be the 15th-most populated country in the world. 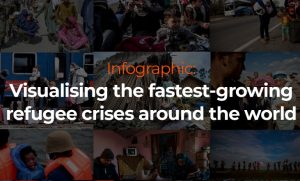 At the end of 2021, the number of forcibly displaced people was 89.3 million, including:

This is more than double the 42.7 million people who remained forcibly displaced just 10 years ago and the most since World War II. Some of those were people forced to flee multiple times in the same year.

Twenty-three countries, hosting a combined population of 850 million people, faced high or medium-intensity conflicts in 2021 according to the World Bank.

In 2021, the world’s 10 most neglected refugee crises were all in Africa, according to the Norwegian Refugee Council.

“If you have a food crisis on top of everything I have described war, human rights, climate, it will just accelerate the trends I’ve described in this report,” UN High Commissioner for Refugees Filippo Grandi told journalists this week, describing the figures as “staggering”. 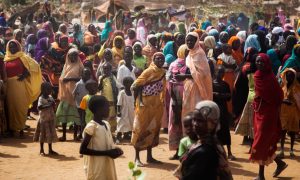 In 1951, the UN established the 1951 Refugee Convention, set up to protect the rights of refugees in Europe in the aftermath of World War II. In 1967, the convention was expanded to address displacement across the rest of the world.

The info graphic below highlights 70 years of refugee journeys, since 1951. The number of refugees has more than doubled over the past decade from 15 million in 2011 to over 30 million in 2021.

The plight of Palestinian refugees is the longest unresolved refugee problem in the world. On May 14, 1948, the British Mandate for Palestine expired, triggering the first Arab-Israeli war. Zionist militias expelled at least 750,000 Palestinians.

According to figures compiled by UNHCR, by 1952 the number of Palestinian refugees was 867,000. Today, that figure is 5.8 million.

Afghanistan has been ravaged by four decades of war. From 1979 to 1989, the country was a stage for one of the Cold War’s last battles as Soviet troops fought a bloody war against the Afghan Mujahideen. For the next decade, the county struggled on. Just 12 years after the Soviet withdrawal, Afghanistan would find itself invaded again, this time by the US. The highest number of Afghan refugees was recorded in 1990 when 6.3 million refugees were reported.

The war in Ukraine is the fastest-growing and largest displacement crisis since World War II, with more than 7 million refugee movements recorded since February 24, following Russia’s invasion. Including IDPs, it is estimated that some 14 million Ukrainians have had to flee their homes. 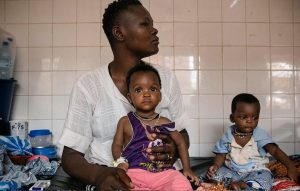 The infographic below visualises the fastest-growing refugee crises around the world.

After Ukraine, Syrians are the second biggest population of refugees today (6.8 million) followed by Palestinians (5.8 million) and Venezuelans (4.4 million).

On the receiving end, low- and middle-income countries host around 85 percent of the world’s refugees. As of June, 2021, Turkey hosted the most refugees (3.7 million) followed by Jordan (3 million), Colombia (1.7 million), Uganda (1.5 million) and Pakistan (1.4 million).

In Europe, Germany was home to about 1.2 million refugees, the highest in the continent.

Children account for 30 percent of the world’s population, but 42 percent of all forcibly displaced people.

Not all refugees can travel equally

More than 4.3 million people are stateless – or not recognised as nationals by any country. This makes it difficult for them to access essential services like education, health care, employment or being able to travel.

For those fortunate enough to have the necessary travel documents, free movement is often restricted by the passport one holds. 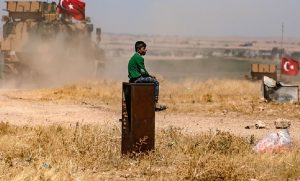 The infographic below shows the number of countries where nationals of different countries can travel visa-free or with a visa on arrival.

Among the most restricted are Afghans, Syrians and Somalis, who are only able to travel to a handful of countries. On the other end of the spectrum, Venezuelans and Ukrainians are able to enter more than 100 countries.

Refugee camps are intended as a temporary safe haven to meet refugees’ basic needs. However, many people end up living in these camps for decades. According to the UNHCR in Kenya: “Many displaced persons spend more than 16 years living as refugees in temporary shelter.”

With approximately 1 million inhabitants, the Kutupalong refugee camp in Cox’s Bazar, Bangladesh, is the world’s largest. The series of camps host mostly Muslim Rohingya refugees who fled a military-led crackdown in neighbouring Myanmar in 2017.

The Rohingya have been described as the “world’s most persecuted minority”. The government of Myanmar does not consider them one of the country’s 135 official ethnic groups and they have been denied citizenship since 1982, effectively rendering them stateless. 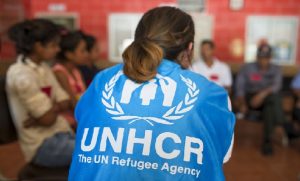 The infographic below highlights some of the largest refugee camps around the world.

For most refugees, returning to their home country based on a free and informed choice would be a preferred solution to remaining displaced.

According to return intention surveys, which the UNHCR and its partners conduct globally, around one-third to one-half of refugee populations have expressed a willingness to return home in the future, should conditions allow. Ongoing insecurity and the lack of livelihoods or housing are among the most common reasons refugees say they cannot return.

Media spoke to several refugees about the challenges they face and their hopes to return home. This is what they had to say:

In 2021 alone, around 23 million people were displaced within their own countries by extreme weather events, according to the Internal Displacement Monitoring Centre.

“It’s a record that should never have been set,” said UN High Commissioner for Refugees Filippo Grandi in a statement. “This must serve as a wake-up call to resolve and prevent destructive conflicts, end persecution, and address the underlying causes that force innocent people to flee their homes.”

Grandi urged action to address the causes of displacement, saying humanitarian aid was only treating the consequences.

“To reverse this trend, the only answer is peace and stability so that innocent people are not forced to gamble between acute danger at home or precarious flight and exile,” he added. (Int’l News Desk)