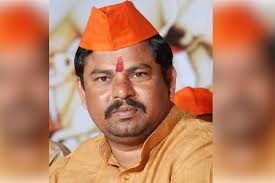 Our suspension is a black day for democracy: BJLP leader Raja Singh

In a statement, Singh said they were suspended by the State government by violating all the existing rules. He alleged that their suspension for the entire budget was part of a conspiracy of Chief Minister K Chandrashekar Ro. He alleged that the State Government had not even allowed them to hold a protest protest at Mahatma Gandhi statue located on the premises of the State Assembly after their suspension.

He asked the Chief Minister as to who gave him the right to hold the protest program? He asked the CM as to how the police would arrest them from the premises of the State Assembly. Targeting Speaker Pocharam Srinivas Reddy, he said it was unfortunate that the Speaker did not come to their rescue when their rights were taken away by the State government. He alleged that CM KCR,
who demanded redrafting of the Indian Constitution, was muzzling the voice of the MLAs of the Opposition parties. He alleged that KCR was ruling the State by keeping police as his security  guards  and claimed that the CM was running the State Assembly, which is treated as a temple , with the help of the police. He said they would not allow KCR to implement his own constitution and added that time to end KCR’s rule was very near in the State. (PMI)