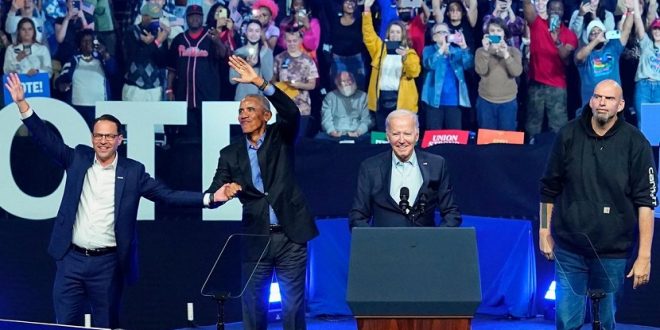 Obama, Trump, Biden rally in Pennsylvania ahead of midterms

WASHINGTON/ PENNSYLVANIA: US President Joe Biden has told voters in Pennsylvania that next week’s midterm election will be a “defining moment” for the country’s democracy, as his predecessor and rival Donald Trump called for a “giant red” Republican wave to defeat the Democrats. 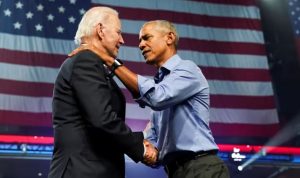 The biggest names in politics in the United States, including Democrats Biden and former President Barack Obama, as well as Trump, a Republican, were in Pennsylvania on Saturday hoping to tip the balance in a pivotal midterm Senate race between Democratic Lieutenant Governor John Fetterman and Republican celebrity doctor Mehmet Oz.

Polls put Republicans in a dead heat with Democrats for the Senate and also show them well ahead in the fight for the House of Representatives as voters, already riled up by culture wars around gay rights and abortion, seek to take out frustration over four-decades-high inflation and violent crimes.

“Folks, three days, three days until one of the most important elections in our lifetime. The outcome is going to shape our country for decades to come, and the power to shape that outcome is in your hands,” Biden told thousands of supporters in the city of Philadelphia. 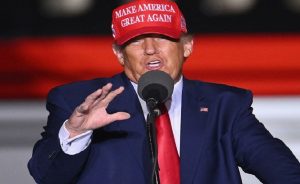 “It’s a choice. A choice between two vastly different visions of America.”

Trump, who sources say is preparing to launch a third consecutive run for the White House after the midterms, continues to falsely claim that his 2020 defeat by Biden was the result of widespread fraud. Multiple courts, state agencies, and members of his own administration have rejected that claim as untrue.

Still, opinion polls show a significant number of Republican voters accept the claim, as do many candidates for Congress, governor and state offices overseeing election administration.

Biden, citing the Republicans’ growing support for conspiracy theories, said democracy was “literally on the ballot”.

“This is a defining moment for the nation and we all, we all must speak with one voice,” he added. (Int’l Monitoring Desk)