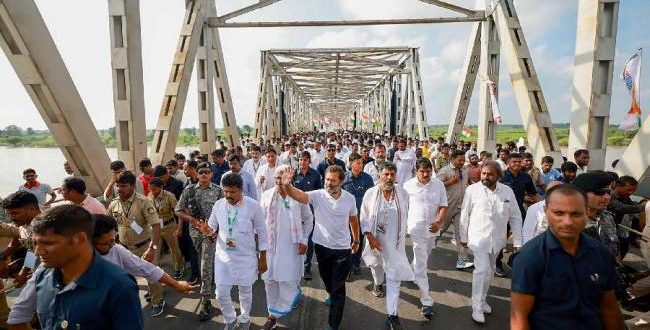 None can stop my Bharat Jodo Yatra: Rahul Gandhi

Hyderabad, Oct.23 (Press media of india): Congress leader Rahul Gandhi today made it clear that no force can stop his ongoing Bharat Jodo Yatra. He also said his yatra was meant to protect the integrity of the country.

Addressing a huge gathering of the party leaders and workers at Goodaballur of Narayanpet district near Karnataka border after entering the State, Rahul Gandhi set his foot on the soil of the State at Krishna Checkpost near Gudaballoor village from Maktal Assembly constituency. Gandhi targeted the BJP and right wing organisation RSS and alleged that the two organisations were trying to destroy and divide the country.

He announced that he was taking a break of three days from his padayatra keeping in view of Diwali festival and added that he would resume it on October 27 from the same place.