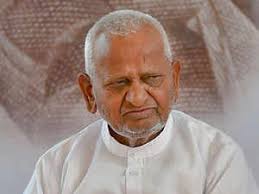 Modi failed on Lok Pal: Anna Hazare to go on fast on Jan 30

Hyderabad, Jan.19 (PMI): Noted Gandhian Anna Hazare today said he will take up fast-unto-death at his Ralegam Siddhi in Maharashtra on January 30 to mount pressure on the BJP government at the Centre.

Talking to mediapersons here, Anna Hazare accused the Narendra Modi Government of miserably failing to keep his promise of setting up Lok Pal and Lok Ayukta. “I have decided to go on fast-unto-death in protest against the failure of the Modi Government”, he said. The Centre made Lok Pal Act in 2014 and forgot to take necessary steps to set up Lok Pal mechanism in the country, he added.

“Narendra Modi as prime ministerial face of the BJP had made promise in this regard and swiftly forgot”, he charged. “The nation was unhappy at the Modi Government that failed for five years. The BJP Government did nothing in this regard and failed to appoint Lok Pal and so the protest, he added. (PMI)