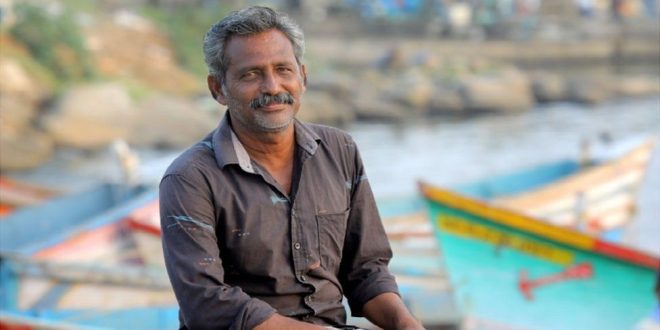 NEW DELHI/ When Edison Davis and Augustine Nemus set out to fish from India’s southern coast on 27 November, they promised their families they would be home for Christmas.

Then, there was no word from them for weeks.

The two men were part of a group of 15 fishermen who set sail in a deep-sea vessel for close to three weeks to fish in the Arabian Sea. 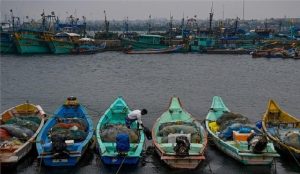 The men’s families didn’t panic at first; they were used to the fishermen spending days at sea but when Christmas came and went and the men still hadn’t returned home, the families began to fear the worst. The memory of Cyclone Ockhi, a powerful storm that struck India’s southern coast in 2017 and killed dozens of fishermen was fresh in their minds.

They wondered if something similar had happened to their family members. But the fishermen returned home on 2 January.

Their boat’s engine had suffered a snag and the fishermen ended up marooned on a remote island in British Indian Ocean Territory for days, until they were finally rescued by a passing British vessel.

With no idea when they were going to be rescued, the fishermen had found innovative ways to survive, including by drinking water from coconuts found on the island.

The fishermen had sailed in a wooden boat called Chrisha Mol from Thengapattanam harbour in the southern state of Tamil Nadu but on the seventh day, the boat’s engine broke down and the vessel began drifting deeper into the sea. This continued for five days, until a Sri Lankan boat showed up.

“The crew pulled our boat to a place where the water was around 8m (26ft) deep. We thought we were safe and we dropped anchor there,” Nemus told the BBC. 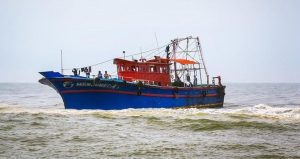 Since Sri Lankan fishing vessels are not allowed to enter Indian waters, the crew advised the fishermen to send wireless messages seeking help from Indian fishing boats in the region.

Unfortunately, its engine wasn’t powerful enough to tow the heavier Chrisha Mol to shore. Chrisha Mol’s owner, who was part of the group, took the boat’s gearbox and left with the Indian boat to get it fixed after reaching the shore.

The crew also left behind their anchor so that the fishermen could firmly tether their boat and prevent it from drifting but on 19 December, a sudden gust of wind caused the rope of one of the boat’s anchors to snap. Three days later the rope of the second one snapped too, and the boat began drifting again.

“We could only pray to God in the middle of the sea. We didn’t know where it was taking us,” Nemus said. “I thought of my wife and two teenage sons.”

The crew checked the navigation device on board.

“The GPS showed us that there was an island 29 nautical miles away,” Davis said. It was located on Salomon Islands in the British Indian Ocean. 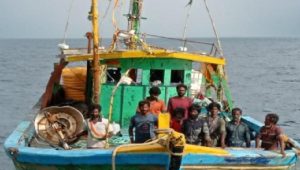 Nine fishermen then got into a dinghy, a small boat they had towed along loaded it with rice and other provisions and headed towards the island, Davis said.

Two fishermen then returned to fetch the five crew members who had waited back on the boat, but by then, the boat had drifted further away.

“We found the boat after searching for it for over an hour,” Davis said.

It took the seven fishermen about five hours to reach the small island, which Mr Davis says was uninhabited. Now they faced a new challenge: how were they going to survive with their supplies close to running out?

They had just enough food to last those 10 days and no potable water to drink.

So, the fishermen turned to nature for help. They used sea water to cook. When they were thirsty, they foraged for coconuts and drank their water. When it rained, they spread out plastic sheets on the ground, collected the droplets and stored the water in cans.

“I felt like we were face-to-face with death. We were not sleeping properly and we cooked and ate sparingly,” Nemus said.

“We feared our provisions would run out anytime. We had no idea where we were and how long we would remain stranded there.”

After five days, on 27 December, they saw a British ship some distance away from the island. The ecstatic fishermen tied a bright red cloth to the branch of a tree and began signaling for help. 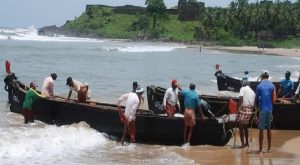 “We tried to attract the ship’s attention in all possible ways. Two hours later, four crew members approached us with water and a basket of fruits. They asked if we were okay,” Davis said. Then, they took the fishermen to the ship in a dinghy.

Onboard the ship, the fishermen had a shower for the first time in days. The crew checked their health, served them food and gave them clothes to change into.

On 2 January, the ship handed the fishermen over to the Indian coastguard at Vizhinjam port on the southern Indian coast. It took a day to verify their identities and complete other formalities, after which they were reunited with their families.

“When I reached home, my children hugged me and asked what had happened,” Nemus said.

“I had a fairy tale to tell them. I don’t know how many times I repeated it. When we were stranded on that remote island, none of us thought we would return home,” he added.

Nemus says that the experience has shaken him, and he’s only going to fish closer to shore. Davis feels differently. “This is my work,” he says. “This is my destiny.”