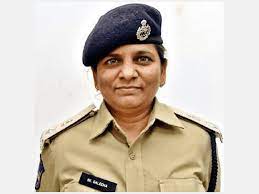 Khammam: Khammam district now has the distinction of having the first Muslim woman IPS officer in Telangana, with DCP in Rachakonda Police Commissionerate, Shaik Saleema, was conferred IPS status in the select list of 2020.

Saleema hails from Komatlagudem village in Chintakani mandal of the district. She was promoted as IPS in the non-cadre IPS promotion list released by the Union Ministry of Home Affairs on Tuesday.

Her father Lal Bahadur also served in the Police Department and retired as Sub-Inspector of Police after joining the department as a constable. She completed her schooling and graduation in Khammam and obtained a master’s degree in Biotechnology from Kakatiya University

Saleema was selected as DSP after cracking the Group-I exam in 2007. She was first posted as DSP in Kagaznagar in erstwhile Adilabad district. Later, she served as the Vice Principal of Police Training College, Amberpet in Hyderabad and served as Additional Commissioner (Admin), Cyberabad Police Commissionerate

“We are very happy that our daughter has been conferred IPS status and becoming the first Muslim woman IPS officer in Telangana,” Saleema’s parents Lal Bahadur and Yakub Bi said, expressing their pleasure over their first daughter’s achievement.

“Actually, she wanted to become an RDO after clearing the Group-I test but was selected for the DSP post. Now she has become an IPS officer and made us all proud,” Bahadur told Telangana Today on Thursday.

“I am happy on being conferred IPS status and also with the distinction of becoming the first Muslim woman IPS officer in the State. All the credit goes to my parents who always encouraged us to study well and excel in our lives,” Saleema said.

Bahadur said all his four children are well settled. His younger daughter Zareena got selected in APPSC group-I mains recently while another daughter Munni is serving as MVI in Khairatabad, Hyderabad. His son, Khasim, is a doctor in Care Hospital in the city.