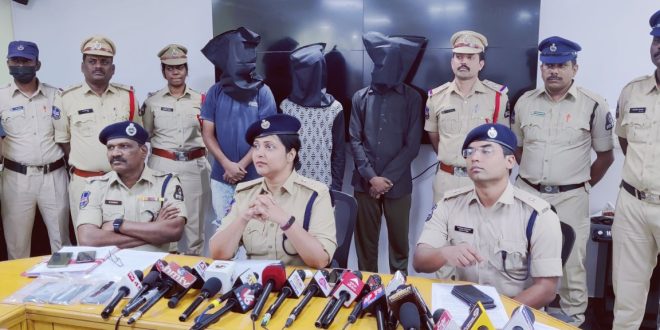 Hyderabad: Three persons were arrested by the Mahankali police for allegedly killing a man two days ago following an issue that started over consumption of liquor at an isolated place.

On Saturday night, Ghouse Pasha took a bottle of beer and went to Old Ghasmandi in Secunderabad when the victim B Shivaji alias Shiva and his friend Daniel spotted and caught him. They threatened and beat Ghouse for consuming liquor in their locality.

“Ghouse informed about the assault to his friends Nayeem and Zakeer who reached the spot in a car and caught Shiva and Daniel. When they all were discussing the issue with Shiva, the assailant Ghouse took a blade and inflicted bleeding injuries on Shiva. He collapsed and died on the spot,” said DCP (North) Chandana Deepthi.

The police who booked a case caught all the three persons and on questioning they admitted to killing Shiva. They were arrested and remanded.

1. Seized the alleged blade used in commission of the offence
2. Red Color Zen Color bearing No. AP 33 8586
3. Hero Honda Splendor NXG bike bearing No. AP 10 AZ 1648 used by the alleged accused A1
4. 03 Mobile Phones of the accused persons
5. Beer Bottle found at the place of offence
6. T-Shirt (Black & White Color), Sweater (Ash Color), jeans (Ash Color) containing blood stains of accused A1 which he was wearing during the commission of this offence.

The above arrest was made under the supervision of Sri. B.Ramesh ACP Mahankali Division, North Zone, Sri. Kaveti Srinivasulu SHO Mahankali and their team.(PMI)