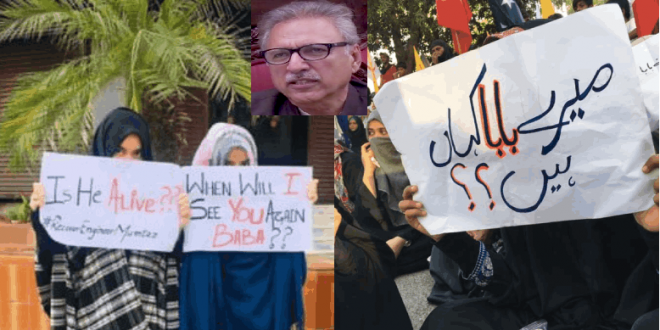 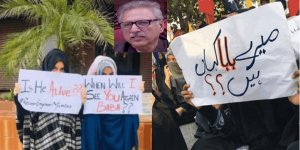 MELBOURNE/KARACHI: Thousands of family members of hundreds of missing persons including women, children aged, ill and disables have begun staging sit-in outside the residence of President of Pakistan Dr Arif Alvi situated in Karachi’s Muhammad Ali Society while, neither the President nor any other authority noticed yet since the sit-in was started 48 hours ago hence, neither none of one provincial nor federal government’s official is ready to give any weight to the protesters’ claim even to listen them that why they gathered in most hottest climate and what they are demanding but on the other hand the Law Enforcing Agencies (LEAs) have prepared a plan to disburse protesters by using force as ordered by ruling party, sources, victims, aggrieved people and reporters claimed.

The protesters are demanding the release of 40 new missing persons in Sindh; 38 from Karachi and two from other cities of the province while the protestors vow to not leave the area until the president listens to them and promises immediate action.

The protesters were carrying portraits of missing persons. This term is being used in Pakistan for those subjected to enforced disappearance. Elderly grandfathers and grandmothers, children, women, youths, all age group people are protesting and the rest of the community, family friends, near and dear ones and supporters are expressing solidarity with them.

The Shia Missing Persons Release Committee (SMPRC) leader Rashid Rizvi said that President Arif Alvi must listen to genuine demand of the families. He denounced restrictions on media coverage of the sit-in.
The families have appealed to the government, polity, LEAs, ‘security organizations’ and the media to consider the Shia victims of enforced disappearance abducted as their own sons and brothers.
They urged all to ask themselves where they would be today; at home or at the sit-in protest if their family members would have been subjected to enforced disappearance.
They have appealed to Ulema (priests) to come forward to shoulder their responsibility.

A woman, whose two sons were missing, held their pictures in her hands and asked if they looked like ‘terrorists, criminals or target killers’. She said that one of them was a second-year student, while the other had just started his professional life.

“Do they look their terrorists, criminals or target killers to you? Is this why I brought them up and gave the best of education so that they would be taken away from me?”

According to the British Broadcasting Corporation (BBC), ‘missing people’ are one of the most sensitive issues in Pakistan. According to official data, there are more than 1,500 unresolved cases of enforced disappearances in the country.

In a Senate Standing Committee meeting in March this year, Senator Rehman Malik said he was informed by the Commission on Inquiry on Enforced Disappearances that the number of missing persons dealt with by the Commission from March 2011 to 31st Dec 2018 was 3551.

He said that as per the details, 1577 returned home, 691 are confined in interment centres, 440 are in different jails for terrorism and criminal charges, 184 dead bodies were found and 659 were not cases of enforced disappearances.

Civil society representatives have urged President Arif Alvi to set up a task force to find a ‘workable’ solution of human rights and labour rights.

They also called for establishing a commission for rights of the minorities in the light of a Supreme Court’s recent decision.

A delegation that called on President Alvi on Saturday at the Sindh Governor House also raised issues of missing persons, curbs on media freedoms and retrenchment of employees in media houses.

The delegation also presented a memorandum of the issues being faced by the rights activists.

“Civil society and labour rights activists from all provinces of Pakistan have urged the President to ensure provision of fundamental human rights including labour rights to all citizens ensured under the Constitution,” rights activist Karamat Ali told a press conference here at the Karachi Press Club on Sunday.

Ali said that the President heard the delegation members very patiently and assured that their grievances would be addressed.

The civil society’s memorandum highlighted the violation of freedom of association, freedom of press, right to free trial, minorities, women and children rights.

“We have proposed to set up a task force comprising senior government officials, experts from private sector and civil society representatives to find a workable solution,” he said. The civil society also raised the issue of missing persons.

“We have urged the government to find a lasting solution for the problem. Enforced disappearances are no solution to the issue of terrorism or anti-state activities. Those involved in any criminal cases must be brought to courts and dealt in accordance to the law,” Ali said.

“The actions by the state and non-state actors in recent years have resulted in curbs on freedom of expression and freedom of media. A recent raid on the Karachi Press Club (KPC) by plain-clothes armed men is one example of harassment of journalists,” he said, adding: “Retrenchments of media people, drastic reduction in government ads to newspapers and TV channels, unannounced sanctions against some media houses, surveillance and harassment of those using social media as a platform of expression are other examples of increased hindrances in the way of the right to expression.”

Meanwhile, thousands of Pakistani Shias, Christians, Ahmadis, Hindus and other minority people those already forcibly migrated overseas have once again demanded President Arif Alvi to take world most sensitive and burning Shia missing persons and target killing issue seriously and protect all minorities especially mainly aggrieved Shias in Pakistan otherwise, they will start sit-ins in-front of Pakistani Embassies and High Commissions across the world if the situation remains same.