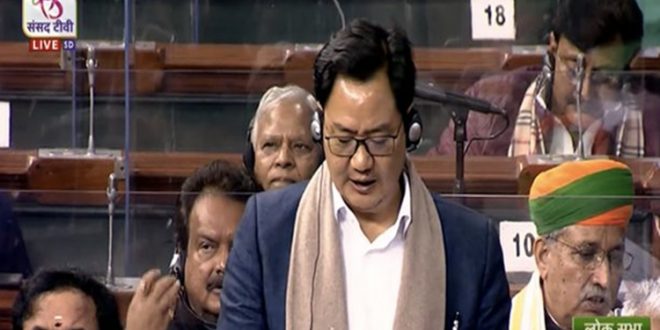 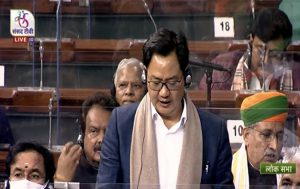 New’Delhi’Dec 20’2021–The Lok Sabha has passed the Election Laws (Amendment) Bill 2021, amidst protests and sloganeering today.

The bill provides linking of Aadhar number with electoral rolls besides giving four opportunities to enroll in a calendar year as voter upon attaining 18 years of age. Apart from this, the Bill has provisions of gender neutrality in regard with service voters and to enable the requisition of any premises for election purposes.

Replying to the discussion, Union Law and Justice Minister Kiren Rijiju said that the Amendments in the Bill would bring clean and fair elections. He said, linking of Aadhar number with electoral rolls is not compulsory or mandatory but voluntary.

Refusing the allegations of the opposition, he said, the amendments are based on the recommendations made by Election Commission of India and the Parliamentary Standing Committee as well. He also said the Government has thoroughly discussed the recommendations with ECI and the states as well.

While moving the Bill for passage, Mr. Rijiju said unlike earlier, now a person could get an opportunity to enroll as a voter four times in a year on the 1st Day of January, April, July and October.

Later talking to the Media outside the parliament, Minister Kiren Rijiju said, the Bill will pave the way for greater electoral reforms in the country.

Earlier, Congress leader Adhir Rajan Chowdhury, Asaduddin Owaisi of AIMIM, Kalyan Banerjee of TMC, NK Premchandran of RSP and Ritesh Pandey of BSP opposed the bill. The Opposition pointed out that the Government is bringing an important bill in hurry and not allowing the thorough discussion on the contents.