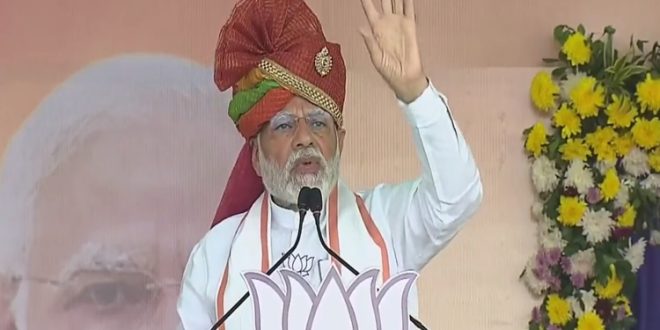 Gujrat’Dec 08 2022-The BJP has retained power in Gujarat for a record seventh time with a landslide victory in the assembly. The BJP has won 150 seats and is leading in 6 in 182 member assemblies while Congress has bagged 16 seats and is leading in 1. Aam Aadmi Party got five seats while Independent candidates registered victory in three constituencies. 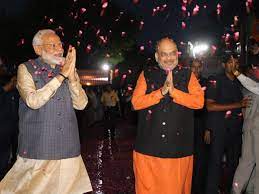 Prime Minister Narendra Modi has thanked the people of Gujarat for giving BJP  a landslide victory in the State Assembly elections.  Mr Modi said, he is overcome with a lot of emotions seeing the phenomenal election results. He added that people blessed politics of development and at the same time expressed a desire that they want this momentum to continue at a greater pace.  The  Prime Minister said that each of the workers is a champion and this historic win would never be possible without their exceptional hard work whom he termed as the real strength of the party.
Union Home Minister Amit Shah has saluted the people of Gujarat for the historic win of the BJP in the State Assembly election. Mr. Shah said, Gujarat has rejected those who do politics of hollow promises, freebies and appeasement and given an unprecedented mandate to the BJP, which worked for public welfare and development.  He mentioned that this massive victory reflects that every section is it women, youth, or farmers, all are wholeheartedly with the BJP.

Mr. Shah has termed the  BJP’s win in the State as a victory of the unwavering faith of the public in the development model of Prime Minister Narendra Modi. He noted that Gujarat has always done the work of creating history. He added that in the last two decades, the BJP  broke all the records of development in the State and today the people of Gujarat have blessed the BJP and broken all the records of victory.

BJP national president Jagat Prakash Nadda has said that the party’s victory in the Gujarat Assembly Polls shows people’s faith in its policies. In a tweet, Mr. Nadda congratulated Gujarat Chief Minister Bhupendra Patel, the party’s state chief C.R. Patil and other party workers following BJP’s victory in the state assembly polls. He said the state has set new records of development under Prime Minister Narendra Modi’s leadership in the last two decades. Mr. Nadda added, as a result, the people of Gujarat have blessed the party with a new record victory.

Maharashtra Chief Minister Eknath Shinde has congratulated the people of Gujarat for voting in high numbers for the Bhartiya Janta Party. He also congratulated Prime Minister Narendra Modi and Union Home Minister Amit Shah for their efforts in developing the state and earning the confidence of voters.

Maharashtra’s Deputy Chief Minister Devendra Fadnavis has congratulated the people of Gujarat for ensuring BJP’s record-breaking win. Addressing a press conference in Mumbai this afternoon, Mr. Fadnavis said the unprecedented win has proved that there was no anti-incumbency despite the party being in power for the last 27 years.