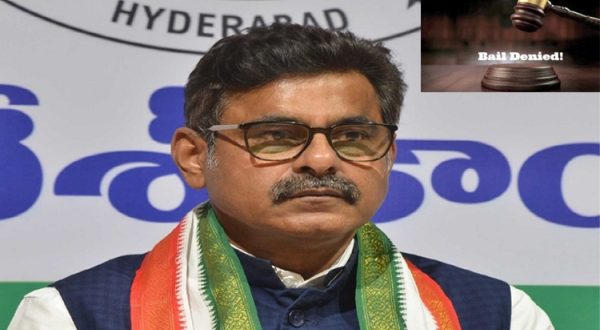 Hyderabad: Congress leader and Chevalla Konda Vishweshwar Reddy who was earlier booked by the Banjara Hills police for wrongful confinement and criminal intimidation, has been denied anticipatory bail by the Nampally Criminal Courts in Hyderabad on Wednesday.

The court set aside his petition for anticipatory bail and the case against him for allegedly confining, threatening, and assaulting a sub-inspector and constable at his office in the city last week, has been registered.

Based on the complaint filed by the two police officers a case was registered under Section 332 (Voluntarily causing hurt to deter public servant from his duty), 342 (Wrongful confinement) and 506 (Criminal Intimidation) read with 34 (Acts done by several persons in furtherance of common intention) of the IPC last week.

The Police have been searching for Konda Vishweshwar for the past one week and he has been evading them since the case was filed.

During the Telangana Lok Sabha elections time ,Sub-Inspector Krishna and a constable, Srinivas, had visited the office of the Konda Vishweshar located in Banjara Hills, regarding a case related to one Sandeep Reddy who was his associate.

Sandeep had been detained by the police after he was caught carrying Rs 10 lakh raising doubts whether the cash was meant to influence voters. When they Sub-Inspector, along with the constable, went to the office of Konda Vishweshwar, to inquire about the cash seizure from Sandeep, they were allegedly confined in a room on the second floor and threatened by Vishweshwar Reddy and his office staff.

Following which a case of wrongful confinement and criminal intimidation was filed by the police officials against Konda Vishweswar Reddy.

It needs to be seen whether he will approach the Telangana High Court for further relief or surrender before the police.