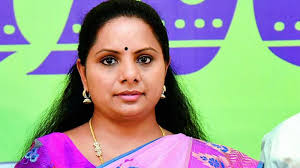 I will slap Nizamabad MP with my chappal if he continues to indulge in personal remarks: Kavitha

Hyderabad, Nov.18 (Press media of india): TRS MLC Kalvakuntla Kavitha came down heavily on Nizamabad MP Dharmapuri Aravind for making personal remarks against her, saying that she will not hesitate to slap him with her slipper in a chowrasta of Nizamabad town.

Speaking at a press conference here on Friday, the MLC said the people of Nizamabad were getting regretted for being voted to elect Aravind as an MP and and he was the worst kind of politician I have ever seen in my political life

Aravind is very arrogent person and always speaks with narrow mindedness. His behaviour is very cheap and uses foul language. The MP doesn’t have a character and morals. He won the Nizamabad Lok Sabha seat by accident with the support of Congress party, Kavitha said.

“I have been in politics since 2006 but never indulged in personal remarks against any other leader. I have always spoken about the issues. But, for the first time, I am forced to speak against a person, Aravind, who has a characterless and dirt. Mind it Aravind, if you don’t stop indulging in personal remarks, I will not hesitate to slap you with my chappal in a chowrasta of Nizamabad town,” Kavitha warned.

Stating that the Lok Sabha Member has  cheated farmers by failing to keep his promise to bring the Turmeric Boar, Kavitha said the MP had never raised the issue of Turmeric Board and problems of Nizamabad district in Parliament during his stint. He has made a promise of Turmeric Board by issuing the bond papers to farmers. We are also planning to lodge a criminal complaint against him for cheating the people, she said.

She also alleged that Aravind Kumar had also mentioned his education qualification in the election affidavit with fake degrees and said that the TRS party was planning to lodge a complaint with the Election Commission of India (ECI) in this regard.

Responding to the reports that BJP had contacted her to join the party,  Kavitha said, “In this country at this point of time, there have been multiple proposals given by various people and political parties. I am a decent politician, I want to remain in politics for long time. Certain proposals have been come to my notice from friends of the BJP and its organisations, asking me to join the saffron party. The proposal is called a Eknath Sinde Model. I have vehemently denied such proposal, saying that the Telangana people will not cheat their State and will not betray their own parties. Here, the people will become leaders with their own strength, not from the entry of backdoor.”(PMI)