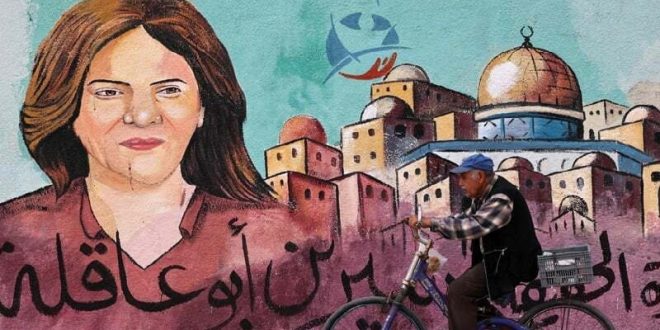 GENEVA/ JENIN/ JERUSALEM/ :The United Nations has said that information it had gathered showed that the bullets that killed Al Jazeera journalist Shireen Abu Akleh on May 11 were fired by Israeli forces. 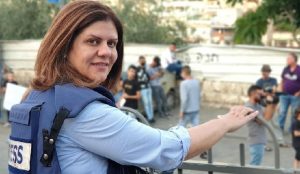 “All information we have gathered … is consistent with the finding that the shots that killed Abu Akleh and injured her colleague Ali Sammoudi came from Israeli security forces and not from indiscriminate firing by armed Palestinians,” UN Human Rights Office (OHCHR) spokeswoman Ravina Shamdasani told reporters in Geneva on Friday.

Shamdasani added that the information the OHCHR had gathered had revealed no “activity by armed Palestinians in the immediate vicinity of the journalists”.

Abu Akleh was killed by Israeli forces while she was covering an army raid on Jenin, in the northern occupied West Bank.

Her killing led to outrage from Palestinians and around the world, with thousands attending her funeral in occupied East Jerusalem. Israeli police attacked the pallbearers at the funeral, almost causing Abu Akleh’s coffin to fall to the ground.

Shamdasani said that the OHCHR’s investigation had shown that Abu Akleh and her fellow journalists had made a concerted effort to be visible as members of the press to Israeli soldiers positioned further down the street. 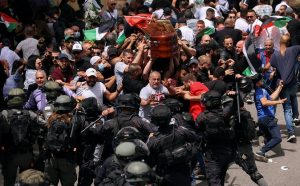 “The journalists said they chose a side street for their approach to avoid the location of armed Palestinians inside the camp and that they proceeded slowly in order to make their presence visible to the Israeli forces deployed down the street,” Shamdasani said. “Our findings indicate that no warnings were issued and no shooting was taking place at that time and at that location.”

“Several single, seemingly well-aimed bullets were fired towards them [the journalists] from the direction of the Israeli security forces.”

Shamdasani added that bullets continued to be fired at an unarmed man who tried to come to Abu Akleh’s aid, as well as a journalist who was sheltering behind a tree.

The OHCHR head Michelle Bachelet continued to urge Israeli authorities to open a criminal investigation into Abu Akleh’s killing, according to Shamdasani.

In a statement responding to Shamdasani’s briefing, the IDF insisted there had been an exchange of fire between Israeli forces and Palestinian gunmen.

“Ever since the incident, the IDF has been investigating and reviewing the circumstances of Ms Abu Akleh’s death,” the statement said. 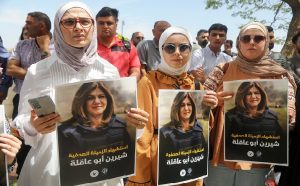 “The IDF investigation clearly concludes that Ms Abu Akleh was not intentionally shot by an IDF soldier and that it is not possible to determine whether she was killed by a Palestinian gunman shooting indiscriminately in her area or inadvertently by an IDF soldier.”

However, Israel later backtracked and said it could not rule out the possibility that an Israeli soldier had fired the shot.

Israel has not yet concluded whether anyone will face criminal charges over the killing, and has not released findings that have emerged from an internal investigation.

Al Jazeera Media Network announced on May 26 that it had assigned a legal team to refer the killing to the International Criminal Court (ICC) in The Hague.

Lawyers working on a case filed to the ICC over the targeting of Palestinian journalists by Israeli forces have also said they will add Abu Akleh’s killing to the case. (Al Jazeera)