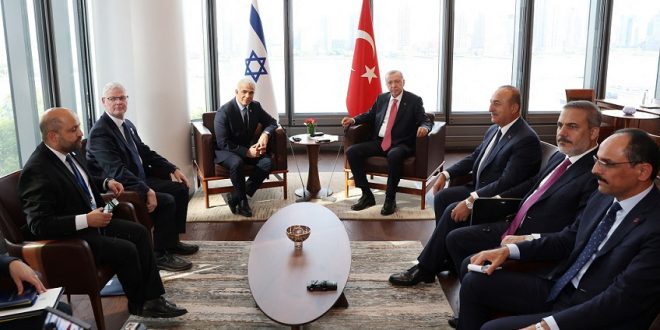 UNITED NATIONS: Israeli Prime Minister Yair Lapid and Turkish President Tayyip Erdogan met on the sidelines of the UN General Assembly on Tuesday for the first face-to-face talks between leaders of the US-allied nations since 2008, Lapid’s office said. 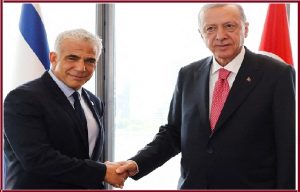 Israel-Turkey relations, long-frosty amid feuding over the Palestinian cause, have warmed in recent months, with energy emerging of as a key area of cooperation. They are expected to exchange new ambassadors soon.

As well as discussing energy, Lapid thanked Erdogan for the countries’ intelligence sharing and noted Israel’s demand for the return of four of its citizens, two of them soldiers missing in the Gaza Strip since a 2014 war, Lapid’s office said.

NATO-member Turkey has been hosting members of Hamas, a movement that rules Gaza and which much of the West designates as a terrorist group. That relationship has often been a sticking point in bids to rebuild Israel ties.

Ankara, for its part, was outraged by the 2010 killing of 10 Turkish activists in brawls that erupted when Israeli marines stormed a ship trying to break Israel’s naval blockade on Gaza. (Int’l News Desk)