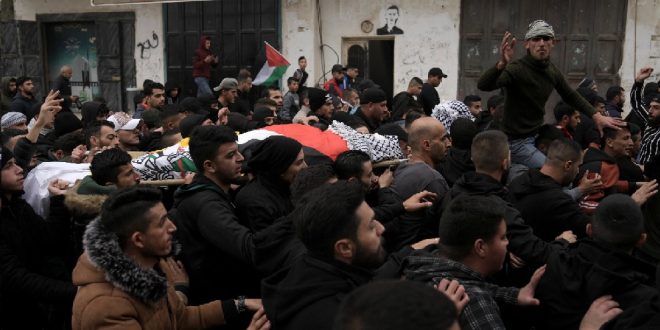 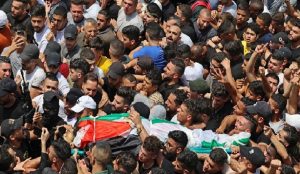 Two were brothers who were shot dead as clashes broke out with Israeli troops during an operation near Ramallah.

The third was martyred in confrontations with troops after two Israeli army jeeps on patrol broke down near Hebron.

Israel’s military said the fourth man was shot near Ramallah after he rammed his car into a soldier, injuring her.

The UN has warned that the Israeli-Palestinian conflict is “again reaching a boiling point” after an escalation violence in the West Bank and Israel.

Israeli forces are carrying out search-and-arrest raids almost every night in the West Bank, where at least 140 Palestinians have been killed this year, most by Israeli fire. More than 30 Israelis have also been killed amid a spate of gun and knife attacks by Palestinians.

Jawad Rimawi, 22, and Thafer Rimawi, 21, who were students at Birzeit University, were killed early on Tuesday about 16km (10 miles) north-west of Ramallah.

Palestinian sources said the brothers had visited a relative in the village of Beit Rima as Israeli forces carried out an operation in the area. 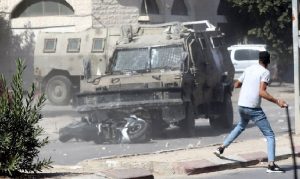 As the forces withdrew, confrontations broke out with dozens of young Palestinians, who threw stones and petrol bombs, the sources added.

The Palestinian health ministry said the brothers were shot and taken to a local hospital, where they died.

The Israel Defense Forces (IDF) said that a “riot was instigated by a number of suspects” during a “routine” overnight activity.

“The suspects hurled rocks and Molotov cocktails toward the soldiers, who responded with riot dispersal means and live fire,” it added.

Mufeed Ikhlil, 44, was shot in the head by Israeli troops during overnight clashes with stone-throwing Palestinians in Beit Ummar, about 10km north of Hebron, the Palestinian health ministry said. He died in hospital.

Nine other Palestinians were shot, according to the ministry.

The IDF said two army jeeps got stuck in Beit Ummar due to “technical malfunctions” during a patrol.

The troops in the vehicles were attacked by Palestinian “rioters” who “hurled rocks and improvised explosive devices at the soldiers”, it added. 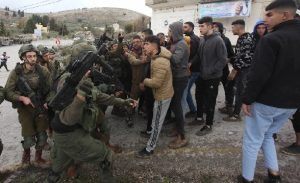 West Bank-based Palestinian Authority Prime Minister Mohammed Shtayyeh called the three killings an “ugly crime”, while the spokesman of President Mahmoud Abbas warned that “the daily killing of Palestinians is a declaration of war”.

A spokesman for the militant group Hamas, which controls the Gaza Strip, said Israel’s “escalation of its crimes and terrorism will be met with an escalation of resistance”.

Later on Tuesday, the IDF said a man rammed one of its soldiers with a vehicle near Kokhav Yaakov, a Jewish settlement about 2km south-east of Ramallah.

“Israel police forces in the area pursued the assailant and neutralized him,” it added.

Israel’s ambulance service that the soldier was 20 years old and that she was in a serious condition at Jerusalem’s Shaare Zedek Medical Center.

The hospital confirmed that the driver was killed. Israeli media identified him as Rani Abu Ali, a 45-year-old man from Beitunia. (Int’l Monitoring Desk)