Hyderabad,  Chief Minister K Chandrasekhar Rao today announced launching of Farmer Investment Scheme to boost the agricultural activity by giving Rs 4000 per acre to all farmers in the State.

Addressing a public meeting at Muduchintalapally village under Shamirpet mandal here on Tuesday, the Chief Minister said Rs 8,000 will be given to the farmers for each crop for two seasons and help them avoid the problem of money lenders. This scheme will be implemented to every farmer in spite of land he possesses, he said, adding that the State government will conduct a land survey for proper information. KCR also announced 50 houses for lambada thandas and 100 each for villages with low population under double bedroom scheme and offer milk giving cattle for the farmers.

The revenue officials will take up special drive for three months for land survey and the villages which will not give its details of land mass will not get funding, he said. The villagers have to cooperate with the officials for the survey aimed at cleansing up the mess and simplifying the rules to avoid moving around the offices. Lands registration should be done in simplified manner, he said. Muduchintalapally, Keshavaram and Lakshmapur villages each have 2,000 acres of forest land and steps are being taken to increase forest cover under Harithaharam scheme in localities needed.

“We need to send back monkeys to forests by increasing green cover in villages, towns and elsewhere he said. Green expansion n KCR asked each family to plant at least saplings and name them after its members. Those protecting the saplings will get two milk giving   cattle. Telangana a three year old state has set a record by showing revenues at 21.9 per cent surpassing other states at national level and Prime Minister Narendra Modi was surprised at this he said. Sure our state will make rapid strides in every sector and give priority for welfare and development the chief minister said.

KCR alleged that in combined state Telangana was put to injustice in every field and the rulers looted our waters. As many as 16 lakhs of people migrated from backward Mahabubnagar district and that situation has gone as we are completing the projects, revived lakes and giving waters to villages and helping the farmers KCR said. Besides that we are encouraging community based professions to eke out livelihood and giving investment for farm activities in a big way, the Chief Minister said. Farmers will benefit through water, current and investment, he said, adding that irrigation problems will go away as the works of the projects are nearing completion. 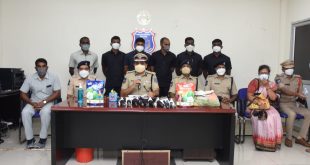