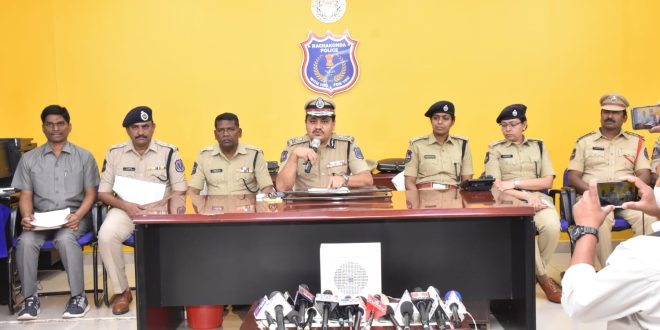 The accused identified as Seelam Sai Krishna, aged 29 working as US Recruiter (Free Lancer), residing at Luxury Heights Apartments, Near Shivalayam, Alkapuri Town Ship, Manikonda, Chijioke Uchechukwu alias Peter, 38, garments business, resident of Nalasopara, Mumbai, Maharashtra State and native of. IHE UBOMA, UMZWU, Community / locality, Imo State, Nigeria. One Okoro, residing at Mumbai absconding.
The police seized 30 gram Methamphetamine, cash of Rs 1500, two Mobile Phones all worth about Rs six lakh.
The police said accused Seelam Sai Krishna is a resident of Hyderabad. Basically, he is native of Guntur. His parents migrated to Hyderabad. He discontinued his studies in B. Tech from St. Martins, Kompally, and subsequently addicted to consume narcotic drugs. About six months back, he came in contact with drug peddler Chijioke Uchechukwu alias Peter. He came in contact with him in OYO hotel at Manikonda and Chijioke Uchechukwu alias Peter indulged in supplying of synthetic drugs i.e., Methamphetamine, Cocaine to the needy persons. He has become popular in his friend circle and started receiving drug orders from his friends and others too.
Chijioke Uchechukwu is a Nigerian national and his English name is Peter. He claimed that he has passed 10th standard and came to India in 2014 on student visa for attending computer courses at Mumbai. In the year 2015, his visa got expired and due non-availability of paying fee to the institute Aptech Computer Education, Shivaji Nagar, Pune, Maharashtra. He didn’t complete the computer course and remained in India.
It was told that while he was in Pune (Kondwa) from 2015 to 2020 he worked for some time in African Kitchen as an attendant in the kitchen. During the year 2017 he came contact with a drug peddler of Mumbai, the said drug peddler used to provide drug / cocaine and he used sell it in Pune and make money, he was apprehended in the year 2017 in Pune and sent to Prison from Shivajinagar PS, Pune. His passport was seized. He was in jail for one year. One of his relatives who resides in Delhi got granted bail and brought him out.
Later in 2018 he shifted to Mumbai, worked for some time in African kitchen at Nalasopara, Mumbai. In August 2022 he came in contact with one drug peddler Okoro. He used to provide drug sachets to hand over the customers. For each consignment Okoro used to pay Rs. 10,000. Chijioke Uchechukwu alias Peter carries drugs in private Buses from Pune, Mumbai to Hyderabad and other places and deliver to the customers. He takes all precautions while carrying drugs and keeps his luggage bag away from his seat to avoid police checking.
In view of forthcoming New Year celebrations, the accused Seelam Sai Krishna called Chijioke Uchechukwu alias Peter and told him to get drug for sale at huge price and make good money. Accordingly, Chijioke Uchechukwu purchased drugs from Okoro of Mumbai and brought it to Hyderabad for sale. The accused Seelam Sai Krishna and Chijioke Uchechukwu alias Peter decided to provide drugs to the needy customers in Hyderabad by charging an amount of Rs 8,000 to Rs 10,000 per one gram of Methamphetamine, and share amount equally.
On December 19 evening hours, while the accused Seelam Sai Krishna and Chijioke Uchechukwu alias Peter were waiting near RK Puram Bridge, Neredmet area to hand over the drugs to customers. Police apprehended them and seized 30 gram of contraband Methamphetamine from their possession.
The above arrests were made under the direct supervision of Mahesh M Bhagwat, IPS., Commissioner of Police, Rachakonda, G. Sudheer Babu, IPS., Addl. Commissioner of Police, Rachakonda, Rakshita. K. Murthy, IPS., DCP, Malkajgiri Zone and under the guidance of K. Muralidhar, DCP, SOT, Rachakonda, Ms. Sadhana Rashmi Perumal, IPS, ACP, Kushaiguda Division, D. Venkanna Naik, ACP, SOT, A. Narsimha Swamy, Inspector of Police, Neredmet PS, by A. Sudhakar, Inspector of Police, SOT, LB Nagar Zone, Sub-Inspectors K. Prathap Reddy, Ch. Srinivasulu and Police Personnel of SOT, LB Nagar Zone and Neredmet PS of Rachakonda. (PMI)