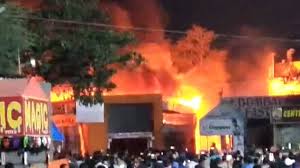 Hyderabad, Jan.31 (PMI): Industrial Exhibition will remain closed for two to three days due to fire accident on Wednesday, according to Exhibition Society president and former minister Etala Rajender.

Speaking to mediapersons here today, Rajendar said he inspected the stalls gutted in the fire and sought to know about the cause of the inferno. He said the exhibition will remain closed for two to three days for restoration of normalcy on the premises. Due to late arrival of fire engines, more loss was incurred and some 300 stalls were reduced to ashes, he said. “I have gone through the stalls gutted in the fire and loss was yet to be estimated”, he said.

The former minister also said a report will be coming by this evening on the cause of the fire. Fire engines rushed to the spot and put out the raging flames. He expressed grief at the incident and promised to see that preventive steps are taken. “We have instructed the officials to close the exhibition stalls for two to three days. On repairs and normalcy, the Exhibition Society may extend Exhibition date for a few more days”, he said, adding that necessary help will be extended to the victims of the fire accident. Rajender said an announcement on the compensation to the affected stall owners would be made after te  receipt of report on damage assessment. The damage assessment, which will be carried out by a 15-member committee comprising of Revenue Division Officers (RDOs) from Hyderabad, is expected to be completed by Friday. He also said efforts would be made to reconstruct the damaged stalls free of cost and that the Numaish would reopen in the next two days. Meanwhile, Home Minister Mohammed Mehmood Ali also visited the Exhibition Grounds and took stock of the situation. (PMI)