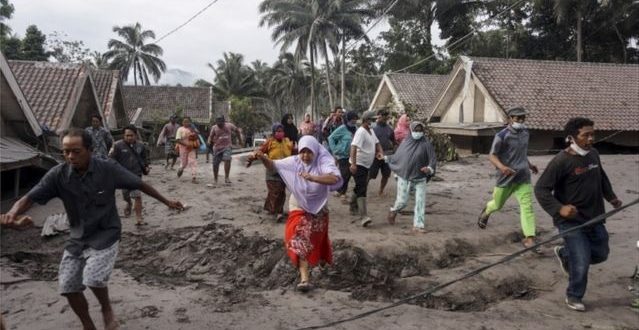 JAKARTA: A volcano erupted in Indonesia on Sunday spewing a cloud of ash 15 km into the sky and forcing the evacuation of nearly 2,000 people, authorities said, as they issued their highest warning for the area in the east of Java Island. 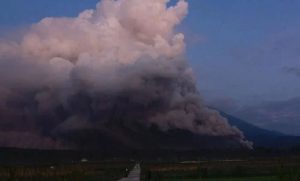 There were no immediate reports of any casualties from the eruption of the Semeru volcano and Indonesia’s transport ministry said that there was no impact on air travel but notices had been sent to two regional airports for vigilance.

“Most roads have been closed since this morning and now it is raining volcanic ash and it has covered the view of the mountain,” community volunteer Bayu Deny Alfianto told Reuters by telephone from near the volcano.

Indonesia’s disaster mitigation agency (BNPB) said 1,979 people had been moved to 11 shelters and authorities had distributed masks to residents. The eruption began at 02:46am and rescue, search and evacuation efforts were going on.

The volcano’s plume of ash reached a height of 50,000 feet (15 km), said Japan’s Meteorology Agency, which had initially been on alert for the possibility that the volcano could trigger a tsunami. It later ruled that out.

The eruption, some 640 km (400 miles) east of the capital, Jakarta, follows a series of earthquakes in the west of Java, including one last month that killed more than 300 people. 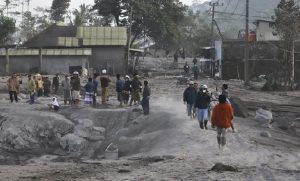 Indonesia’s Center for Volcanology and Geological Hazard Mitigation, PVMBG, raised the level of volcanic activity to its highest level and warned residents not to approach within 8 km (5 miles) of Semeru’s eruption centre.

Hot ash clouds had drifted nearly 12 miles (19 km) from the centre of the eruption, it said.

PVMBG Chief Hendra Gunawan said a bigger volume of magma could have built up compared with previous eruptions of the volcano, in 2021 and 2020, which could mean greater danger for a bigger area.

“Semeru’s hot clouds could reach further and at a distance where there are many residences,” he said.

In a video sent to Reuters by police in the area, villagers were seen moving away from the slopes of the volcano, some with belongings stacked on motorbikes. A damaged bridge was covered in volcanic ash.

With 142 volcanoes, Indonesia has the world’s largest population living close range to volcanoes, with 8.6 million people within 10 km (6 miles) of one. 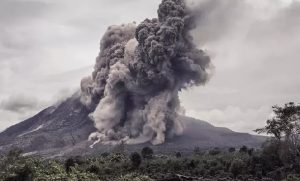 The deadly late-November quake that hit in West Java was 5.6 magnitude but at a shallow depth. A 6.1 quake struck at a deeper depth on Saturday sending people running from buildings but it did not cause major damage or casualties.

Earlier, Indonesian authorities raised the warning on Semeru volcano on the island of Java to the highest level on Sunday after an eruption spewed a column of ash high into the air.

The evacuation of people, which includes children and seniors, living near the volcano in East Java province had also begun with 93 residents so far evacuated to shelters, Indonesia’s disaster mitigation agency, BNPB said in a statement. (Int’l Monitoring Desk)