SAHYADRI/ NEW DELHI: In a horrific incident in India, police booked four men who allegedly raped, killed, and then ate a monitor lizard after cooking it, Vice reported.

The incident took place at the Sahyadri Tiger Reserve, in the state of Maharashtra. 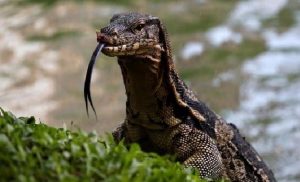 The security footage in the forest caught the men trespassing in the reserve’s Chandoli National Park. Forest officials found videos of the accused men gang-raping an already endangered animal, a monitor lizard, on their phones.

“I have never seen a crime like this before,” division forest officer Vishal Mali said. “The men are in their 20s and 30s, and they appear to have done it for fun. There was no religious or black magic agenda.”

The accused were identified as Akshay Kamtekar, Mangesh Kamtekar, Sandeep Pawar, and Ramesh Ghag. They were arrested under India’s Wildlife Protection Act 1972. They were, however, granted bail last week by a local court.

“Not only is this cruel, but there is a risk of zoonotic diseases from this kind of case. There are concerns of men carrying STDs and other infections from their act,” Mali said.