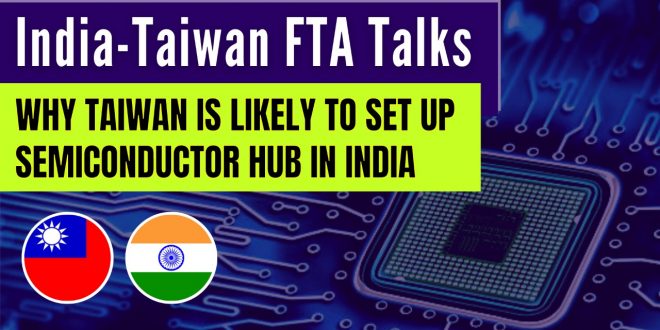 India-Taiwan FTA Talks: Why Taiwan is likely to set up semiconductor hub in India

Talks between India and Taiwan for signing a Free Trade Agreement are now underway. Both the nations have started negotiations with the primary focus being kept on setting up of a semiconductor manufacturing hub in India by a Taiwanese firm. A successful agreement would come as a sigh of relief for both Taiwan and India, as the former desperately seeks to move its businesses away from China and with the latter wanting to become a global hub for semiconductors.

India and Taiwan signed a landmark Bilateral Investment Agreement in 2018 to promote investment flow between the two sides. The Agreement seeks to ensure protection for Taiwanese investments in line with international standards, as well as the safety and rights of Taiwanese investors in India. India’s latest ‘Act East Policy’ and Taiwan’s ‘Southbound Policy’ too buttress the economic cooperation between the two. However, the most immediate rationale in expanding the mutual cooperation lies in the setting that like many other Asian and South Asian countries including those of South Korea and Japan, Taiwan too seeks to pull out its investments out of the Chinese soil and reduce its dependence on the country. This happens at a time when India, which too is at the receiving end of Chinese aggression, is expanding massively in terms of capacity generation in technology and international cooperation. Thus, there is a common interest for both the countries to build up a larger cooperative framework.

China stands as the biggest export destination and the largest importing source of Taiwan. Taiwan faces lack of labour as an issue, especially skilled labour. This led the nation to set up manufacturing facilities on Chinese soil, which majorly contributed to Taiwanese import value from China. Of late, the island nation of Taiwan has been facing mounting political and military pressure from China. The latter has increased air incursions and been creating tension in the Taiwan Strait. This is one of the reasons that has prompted Taiwan to expand and collaborate with other countries and its move of having set up a semiconductor hub in the United States forms a part of this decision. Taiwan is also eyeing the possibility of establishing a representative office in Mumbai given the huge potential for investments and manufacturing in the states of Maharashtra and Gujarat.

The domain of Machinery and electrical equipment is seen as Taiwan’s strength, a fact well-recognised by India as it wishes to utilise the advantage to the fullest. This is because of India’s growing appetite for semiconductors as it expands and advances both economically and technologically. The semiconductor demand in India is reportedly estimated to rise from the current USD 2 billion to USD 100 billion by 2025. The Indian government also announced an ambitious outlay of Rs. 76,000 crore under ts PLI Scheme separately in order to give space and flexibility to Indian manufacturers and concerned startups for the development of a semiconductor and display manufacturing electronics ecosystem in the country.

Hence, the FTA talks are firmly pivoted around the proposal to set up semiconductor manufacturing facility in India. Reportedly, the Government of India has also shortlisted few locations for setting up the hub and negotiations are also underway to rope in one one of the leading semiconductor manufacturing firm of Taiwan. According to reports, names of some of the Taiwanese Semiconductor giants like Taiwan Semiconductor Manufacturing Company (TSMC) and United Microelectronics Corporation (UMC) have come up as possible candidates for carrying out implementation of the project. If the projects gets finalised, India will become the second hub of Taiwan’s semiconductors manufacturers after the US