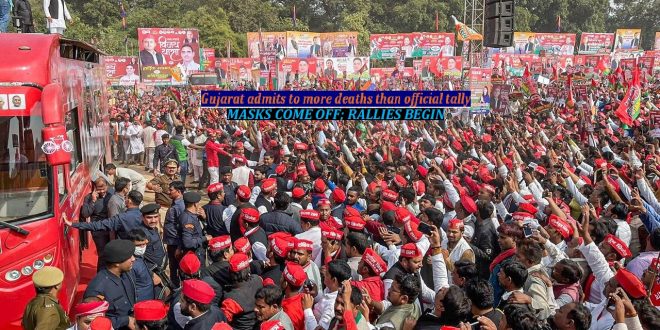 14-12-2021
Bureau Report
NEW DELHI: India reported its lowest tally of active COVID-19 cases in 18 months on Monday, but a sharp drop in the use of protective face masks is causing concern after a rise in the number of infections with the Omicron variant. 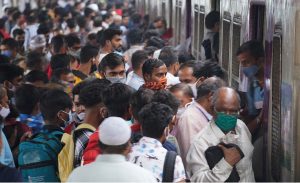 Many people have been standing or sitting close to each other without masks, or covering only their chins, at big rallies held by political parties in several states before elections. Something similar happened before the Delta variant ravaged India from April.
Cases have come down sharply since then, with an active COVID-19 total of 91,456 as of early Monday, the lowest in 561 days, according to the Health Ministry but cases of the Omicron variant have risen to at least 36 in India, and accounted for 3% of the virus sequences analyzed in the country in the past two weeks, with Delta accounting for the rest. Health authorities have been urging people to cover their mouths in public.
“The falling graph of mask use could cost us,” top Indian health official Vinod Kumar Paul told a recent news briefing. “Mask is a universal vaccine, works on every variant.”
Mask-wearing in public has fallen to levels last seen in March, before the second wave of cases, data from the Institute of Health Metrics and Evaluation shows. Current mask-wearing is estimated at 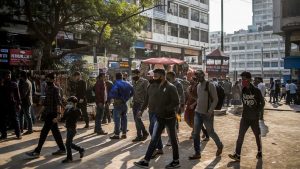 59%, nearly the same as in March, having peaked at 81% in May.
The country reported 7,350 new COVID-19 cases on Monday, taking the total to 34.69 million. Deaths rose by 202 to 475,636.
Meanwhile, India’s western state of Gujarat has acknowledged there were more COVID-19 deaths than its official tally, according to a court document, lending weight to fears that the country’s actual toll is much higher than reported.
Many media reports, based on figures collected from crematoriums and cemeteries, said that during India’s record second wave of cases between April and June, states including Gujarat undercounted deaths as many people died at home due to a severe shortage of hospital beds and oxygen.
Gujarat, Prime Minister Narendra Modi’s home state, told the Supreme Court it had received 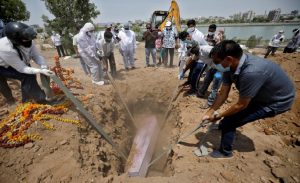 22,557 applications as of Thursday from families of the dead seeking compensation and 16,175 had been approved, according to an affidavit filed on Monday.
Its reported death count is 10,099, according to the state’s latest health bulletin.
A Gujarat official with direct knowledge of the matter said applications had now swelled to more than 40,000 and nearly half had been approved. All of them would get 50,000 rupees ($659) each.
India has reported a total of 475,636 COVID-19 deaths, including many revised figures from states that have come under pressure from courts to accurately represent the scale of the disaster.
The main opposition Congress party said that it believed the actual death toll to be still higher.