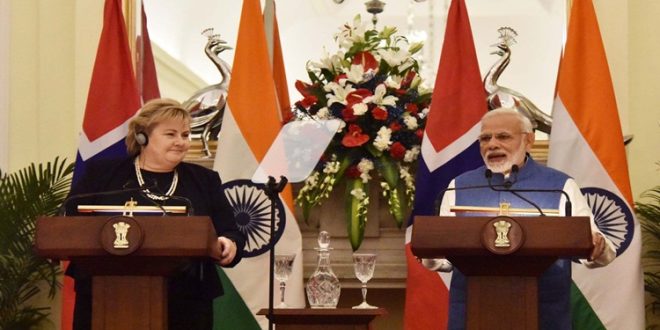 India and Norway have agreed to closely collaborate on ocean economy and achieving the Sustainable Development Goals.

They discussed ways to give new energy and direction to bilateral ties. The two countries also signed a MoU for holding an India-Norway Ocean Dialogue.

Ms. Solberg, who arrived in New Delhi yesterday on her maiden India visit, was accorded a ceremonial reception at the Rashtrapati Bhavan this morning before talks with Modi.

Mr Modi said, he and Ms. Solberg reviewed all areas of the cooperation. He said they also had fruitful discussions on all aspects of the ocean economy.

Mr. Modi said, India and Norway have strong cooperation at the international level and both the countries coordinate closely on issues such as UN Security Council reforms, multilateral export control regimes and terrorism. He said, India and Norway are successfully cooperating in the field of mother and child health under the Norway-India partnership initiative.

Ms. Solberg, in her press statement, said given the importance of India’s economy and the size of its population, the world will not be able to reach the sustainable goals unless India is on board.

The President said that India and Norway share warm and friendly relations. He said, bilateral trade can grow in energy, IT, health and technology sectors.