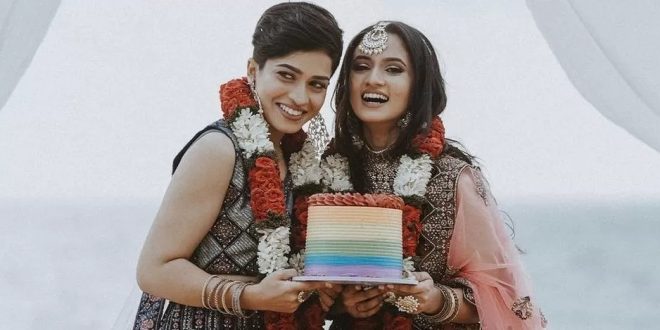 NEW DELHI: Adhila Nasarin and Fathima Noora made headlines earlier this year when a court in the southern Indian state of Kerala reunited the two women after they had been forcibly separated by their parents.

The women had petitioned a court against the opposition they faced after they came out to their families. 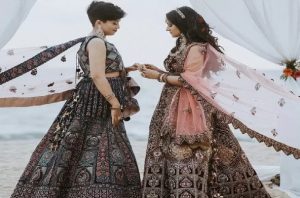 Last month, they made headlines again. This time, for a wedding photoshoot in which the couple posed as brides.

Decked in silver jewelry and dressed in embellished brown and deep blue lozenges (long skirts), they beamed as they exchanged rings and rose garlands under a canopy by the seaside in Ernakulam district.

When Noora, 23, shared the photos on her Facebook page – captioned “Achievement unlocked: together forever”, congratulations poured in for the happy couple.

“We just tried the photoshoot because we thought the idea was interesting,” Nasarin told the BBC over the phone.

The women are among several queer couples who have participated in such photoshoots.

India’s Supreme Court decriminalized gay sex in 2018 after a decades-long legal battle by activists and LGBTQ+ groups. Over the years, awareness about the community has increased, but members still face stigma and a resistance to complete acceptance.

Noora and Nasarin are all too familiar with this. The couple say they still face threats of separation from Noora’s family. 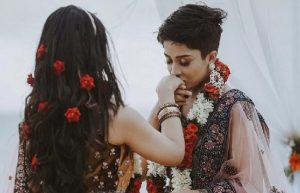 In India, same-sex marriages have no legal sanction, though petitions for legalization are under consideration in the Delhi high court and the Supreme Court.

In the meantime, many gay couples have been participating in commitment ceremonies.

Noora and Nasarin have sanction from the Kerala high court to be together, but they do not have the privileges or rights that a married couple would enjoy in India.

“If we fill out any form, they ask for a wife, husband or father’s name,” Nasarin explains. “At my workplace and elsewhere, I still have to use my father’s name. We were at a hospital recently and had to give our fathers’ names. It was frustrating.”

This is all the more difficult because the women are not on good terms with their families.

In the absence of support from their families and the community they grew up in, the women rely on each other and LGBTQ+ groups like Vanaja Collective which helped them come together.

Noora and Nasarin met in high school and became close. They spent three years apart after leaving school while living with their families in different districts of Kerala as they worked on getting college degrees, making do with occasional calls and chats when they could. 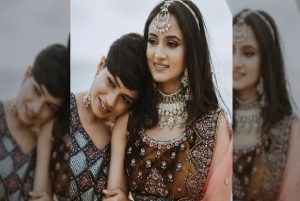 Finish your education and get a job first – this was the advice they received from support groups they reached out to.

It’s the same advice they now offer others who reach out to them.

Nasarin says they knew it would not be easy to leave their conservative families to be together.

“In our community, a lot of people do not have a good educational background. When we try to help people find jobs, this lack of education can become a hindrance,” Nasarin says.

This is why they advise anyone who may be in their position to become financially independent.

“Having a job is very important in being able to live your own life,” Noora says. “The financial security means you are not at the mercy of someone else.”

Since the court order, the two women say they miss nothing from their past.

The freedom they feel is evident from the parts of their lives they share on social media.

Once limited to a shot of holding hands or the backs of their heads, their photos now show them building their lives together, goofing around with Instagram Reels, hanging out with friends and raising a dog together.