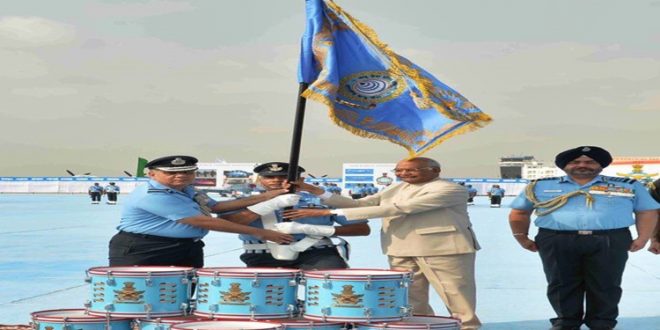 India is firmly committed to peace but if needed can use all its might to protect its sovereign: President

admin March 4, 2019 National, Top News Comments Off on India is firmly committed to peace but if needed can use all its might to protect its sovereign: President 955 Views

President Ramnath Kovind has asserted that India remains firmly committed to peace, but will use all her might to protect her sovereignty if the need arises. He noted that the country’s Armed Forces, exemplified by the air warriors, reflect India’s firm resolve to defend the nation.

He pointed out that the valour and professionalism of the armed forces were on display very recently, as the Indian Air Force carried out pre-emptive strikes on a known terrorist camp, hinting at the air-borne February 26 surgical strike. President Kovind said, India’s growing stature in the comity of nations is consistent with the strength and capabilities of her armed forces. Mr. Kovind was speaking at a function at the Sulur near Coimbatore this morning where he awarded Colours to the 5-Base Repair Depot at the Airbase and the Hakimpet station that is located near Hyderabad.

President Kovind noted that the Indian Air Force is in the process of a comprehensive modernisation plan, keeping pace with the latest advancements. He lauded the Air Force for being at the forefront of all humanitarian assistance and disaster relief operations, besides safeguarding the sovereign skies of the nation. He said, the resilience and tenacity displayed by India’s valiant air warriors is a great source of pride for the Nation.